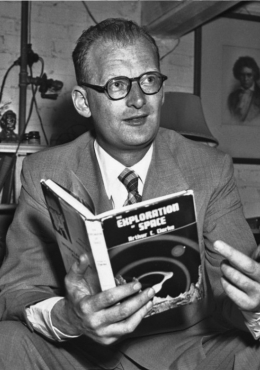 Arthur Charles Clarke (December 16, 1917 – March 19, 2008) is the distinguished English science fiction writer, inventor, and humanist. Throughout his lifetime he created more than 70 works including non-fiction scientific books. Joined by Isaac Asimov and Robert Heinlein, Clarke is the member of the group of writers who brought science fiction into its golden age – the “Big Three”. He was also glorified the “Prophet of the Space Age” for a reason. In his works, Clarke combines his literary skills and scientific wit to popularize observation of space plus predict the world of tomorrow.

He grew up on a farm in a small English city of Minehead but spend half of his life on Sri Lanka where he emigrated in 1956 pursuing his interest in scuba diving. The boy got acquainted with the notion of space travel from science fiction magazines brought from America. He joined different scientific organizations including The British Interplanetary Society, a small group of sci-fi enthusiasts that predicted space travel to take place in not-so-distant future. After the outbreak of WWII Clarke postponed his studies and joined the British air forces performing the duties of a radar officer.

With proper knowledge in physics and engineering, he proposed a satellite communication system widely used during the WWII. After the war, Clarke enrolled into King’s College, London and received a degree in physics and mathematics. Science fiction remained his all-consuming passion and he decided to turn it into a steady income. He started pursuing a career of a professional science fiction writer – he published his first novella, Against the Fall of Night, in 1948. As with all of his works, this novella provided innovative ideas concerning space travel and the possible contact with aliens.

Clarke broadened this story into a full-fledged novel The City and the Stars which was soon claimed to be a must-read for science fiction admirers. His next novel, Childhood’s End, continued the theme of aliens concentrating on how such a contact triggered an evolutionary transformation in humanity. The same ideas can be found in The Space Odyssey series that started in 1948 in the form of a short story, Sentinel, prepared for the a special writing contest of the BBC News Channel. In this story, the writer explained human evolution from the ape-men as encouraged by a superior alien race that accelerated cultural progress of the mankind.

The first novel from the cycle, 2001: A Space Odyssey, was written in collaboration with the famous American film director Stanley Kubrick. They were working on the film of the same name to which Clarke wrote a screenplay. His novel appeared only after the film was released in 1968. Both creators shared an Academy Award nomination for best screenplay. After a long pause, Clarke wrote three more books to complete the series. Another famous novel which is believed to be the cornerstone of Clarke’s creativity was Rendezvous with Rama. This was the first novel from the Rama series which described the contact of humanity with an unknown alien civilization. This novel received two important awards – Hugo and nebula awards.

In the 1980s Clarke hosted a series of popular and successful TV shows, Mysterious World, emphasizing the importance of science. Clarke’s contribution to the popularization of science was recognized by the UNESCO-Kalinga Prize in 1961. He was also presented with the highest civilian award of Ski Lanka for his contribution to science and technology. Among Clare’s legacy, there are non-fiction books which reveal his attitude towards space traveling plus provide his predictions about the destiny of humanity. In Profiles of the Future, Clarke combines various inventions aimed at facilitation space journeys and his personal vision of human evolution. The writer spent his last years in a wheelchair due to the post-polio syndrome. 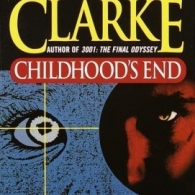 Science is the only religion of mankind.

No utopia can ever give satisfaction to everyone, all the time. As their material conditions improve, men raise their sights and become discontented with power and possessions that once would have seemed beyond their wildest dreams. And even when the external world has granted all it can, there still remain the searchings of the mind and the longings of the heart.

There were some things that only time could cure. Evil men could be destroyed, but nothing could be done with good men who were deluded.