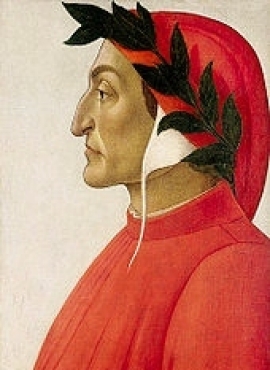 Durante degli Alighieri (1265 – 1321), who is mostly known as Dante, was the most celebrated Italian writer of the Late Middle Ages. Credited as the person who rediscovered the Italian language, Dante provided an encyclopedic overview of t beliefs, values, and morals of the medieval times in his epic poem The Divine Comedy. It’s the main cornerstone in the evolution of the Italian literary language. He was one of the first writers of Western Europe who dared to break the literary tradition of publishing only in Latin. The forerunner of the Renaissance, he cleared the path for a whole generation of prominent Italian writers. Dante’s views towards the use of vernacular languages are described in his essay On the Eloquence of Vernacular.

Dante spent his early years in Florence, a separate republic at that time, and part of Italy at present. A little is known about his early years including the exact date of his birth. He was a descendant of a respected but impoverished Italian family claimed to descend from the ancient Romans. His father took care of his education, so the boy attended Catholic schools. His family also arranged his marriage with Gemma Donati, a member of a wealthy plus mighty Donati family. Girl’s dowry was the main reason for their marriage which took place a couple of years later. They had two sons and a daughter.

According to the common version, the main inspiration for Dante’s works wasn’t his wife but a girl he met on the street at the age of nine. Beatrice Portinari was his life-long sweetheart – till nowadays it remains a mystery whether this was a real person or an imaginary feminine perfection. His distant devotion transformed into courtly love and played an important role in Dante’s creativity and development of his innovative canzoni. After Beatrice’s alleged death, Dante published most iconic poems in the history of European poetry – his collection of verses, The New Life (Vita Nuova). Written in the Tuscan dialect of the Italian language in 1295, these poems present a new approach to poetry, the so-called sweet new style.

A unique combination of verse and prose, The New Life celebrates the spiritual meaning of affection and romantic relationships idealizing the womanhood in a delicate and sincere manner. In 1287 Dante became a student in the Bologna University with law as his major but it didn’t fascinate his imagination. Another important person in Dante’s life was the Italian philosopher and scholar Ser Brunetto Latini. After the death of his father, Latini became Dante’s guardian and advisor. One of his characters is dedicated to his teacher. Dante’s studies didn’t last long – in 1289 he enlisted in the army and took part in a battle at Campaldino.

This launched his political career in the City Council of Florence where the freshly-made politician represented the Guelfs, a medieval political faction. They considered that the Pope shouldn’t interfere into state matters on the contrary to politics of the Ghibellines who thought that the Pope should rule both the church and the state. When the Ghibellines rose to power, Dante was accused of bribery plus intrigues against the Pope. He had to pay a heavy penalty otherwise he would have been burnt at stake. After all his property was confiscated, the writer was forced into exile. There isn’t much information about the writer’s life in exile except for random details.

During that period Dante started to write his most celebrated poem The Divine Comedy in appr. 1307. It took him the rest of his life to finish his story of Hell, Purgatory, and Heaven. Originally, it was called simply Comedy but after Giovanni Boccaccio named it Divine, the new name became widely used. The journey of a lonely man in the afterlife guided by the Roman poet Virgil and later Beatrice had turned into a world masterpiece. Vivid allegories and masterful symbolism of the work reveals the depth of its philosophical and theological layers. This literary genius passed away in Ravenna in 1321 after finishing this book. He had never returned to his hometown of Florence again.

The more a thing is perfect, the more it feels pleasure and pain.