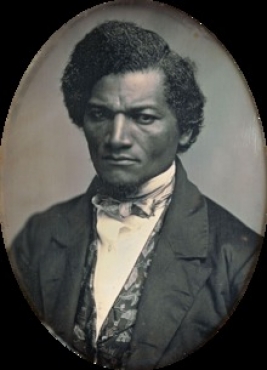 Frederick Douglass is a well-known name in the history of American abolitionist movement. Through his autobiographical texts, he let the world see the reality of slavery that others wished to believe was fictional. He was the first African American to occupy a respected position among civil servants and will always be remembered for his passionate speeches, thorough editorial work, and an immense contribution to American culture.

Frederick Augustus Washington Bailey was born a slave in Maryland and thus it’s no surprise that there is no defined date of his birth. It was sometimes in February of 1818. He never knew his father, who was probably one of the white slave owners on the plantation where his mother lived.

Young Frederick never spent much time with his mother or his grandmother, being given to different relatives and overseers throughout the course of his childhood. His mother Harriet Bailey died when the boy was 10 years old. After that he was sent for fieldwork on the plantation of slave owner families of Anthony and Auld.

His overseer’s wife Sophia taught him the alphabet starting at the age of 12. The master greatly disapproved of it, not wishing his slaves to be educated or open-minded. Eventually convinced by her husband, Sophia stopped teaching the alphabet to Frederick. But at this time the thirst for knowledge had already awakened and he continued his literacy education on his own, learning from the kids and men that he met on the plantation.

It was the reading skill that set Douglass on the road to freedom. With every new newspaper or booklet he read, he started to question the institution of slavery and got to know that there’s another world out there. He also read Bible to other slaves and established Sunday school classes for them.

In 1838 he escaped the slavery to the North states. It wasn’t his first attempt to flee but it was the one that freed him for good. He received some help in the planning of the escape from Anna Murray – a black woman who managed to break free sometimes before that. She gave him clothes, her own saved money, and tips for escape.

In less than 24 hours Douglass made it to New York. On September 15, 1838, Frederick Douglass married to Anna Murray and the couple started to build their free life from scratch in Massachusetts. Still worried that they are being followed, at first they lived under the last name of “Johnson”.

A little bit later Frederick accepted a new name for himself – Douglass – which comes from the Walter Scott’s book “The Lady of the Lake”. That’s how he would be remembered by as a great African American writer. For the next decades, Frederick led an active fight for the freedom and equality of all people.

Besides abolitionist activities and passionate speeches, Frederick Douglass wrote three major pieces that immortalized the horrors and injustice of slavery in the USA. He started his writing career with “Narrative of the Life of Frederick Douglass, an American Slave”, which was published in 1845. This autobiography is a valuable contribution to the history of American freedom movements, both in terms of facts and its language mastery.

The first autobiography was followed by two more, one of them is “My Bondage and My Freedom” (1855) and the other one is “The Life and Times of Frederick Douglass” (1881). All three of these texts bear the resemblance in their style: they are a personal disclosure written with a clear agenda of anti-slavery propaganda. There are quite a large number of narratives written by previous slaves, but Douglass’ texts are remarkably appreciated for their fine language, carefully chosen examples, and interesting structure.

In 1847 Mr. Douglass started to publish a newspaper, “The North Star”, which was one of the leading anti-slavery communication channels. The newspaper was printed out from the basement of the church in New York and represented a strong opposition to white propaganda. The funding for these activities came from Douglass travels to Ireland and Great Britain where his supporters gave him a couple thousand pounds to support his difficult endeavors.

On 1851 “The North Star” would merge with “Liberty Party Paper” and from that time until 1860 it published under the title of “Frederick Douglass’ Paper”.

Frederick polished his mastery of the words writing various pieces, such as an open letter to his previous owner Thomas Auld and one of the most memorable speeches, such as his legendary 1852 Independence Day speech. His language resonated with thousands of Americans of different sex and color.

During the Civil War of 1861-1865 Douglass became an eloquent speaker for freeing all the slaves and invested a lot of effort into pushing this agenda forward. Douglass took an active part in the formation of first African American regiments. He also served as an adviser to Abraham Lincoln on a couple of occasions.

Mr. Douglass didn’t only mention racism and slavery in his speeches. He was also a fierce supporter of equal women’s rights in his lectures and tours around the country. He was one of those (and the only African American) who openly called in favor of signing the Resolution on women’s rights during the Seneca Falls Convention. He believed that his abolitionist efforts were not worth a dime if women were banned from the right to vote.

Frederick Douglass died on February 20, 1895, of the heart attack. This great orator, writer, and activist is remembered in the USA and around the world as a key figure in fighting against racism and promoting equal rights for people of different sex, color, and faith. 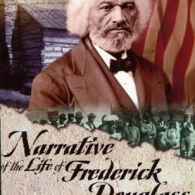 Narrative of the Life of Frederick Douglass

...I therefore hate the corrupt, slaveholding, women-whipping, cradle-plundering, partial and hypocritical Christianity of the land... I look upon it as the climax of all misnomers, the boldest of all frauds, and the grossest of all libels. Never was there a clearer case of 'stealing the livery of the court of heaven to serve the devil in.' I am filled with unutterable loathing when I contemplate the religious pomp and show, together with the horrible inconsistencies, which every where surround me. We have men-stealers for ministers, women-whippers for missionaries, and cradle-plunderers for church members. The man who wields the blood-clotted cowskin during the week fills the pulpit on Sunday, and claims to be a minister of the meek and lowly Jesus. . . . The slave auctioneer’s bell and the church-going bell chime in with each other, and the bitter cries of the heart-broken slave are drowned in the religious shouts of his pious master. Revivals of religion and revivals in the slave-trade go hand in hand together. The slave prison and the church stand near each other. The clanking of fetters and the rattling of chains in the prison, and the pious psalm and solemn prayer in the church, may be heard at the same time. The dealers in the bodies of men erect their stand in the presence of the pulpit, and they mutually help each other. The dealer gives his blood-stained gold to support the pulpit, and the pulpit, in return, covers his infernal business with the garb of Christianity. Here we have religion and robbery the allies of each other—devils dressed in angels’ robes, and hell presenting the semblance of paradise.

I prayed for twenty years but received no answer until I prayed with my legs.

I have observed this in my experience of slavery, - that whenever my condition was improved, instead of its increasing my contentment, it only increased my desire to be free, and set me to thinking of plans to gain my freedom. I have found that, to make a contented slave, it is necessary to make a thoughtless one. It is necessary to darken his moral and mental vision, and, as far as possible, to annihilate the power of reason. He must be able to detect no inconsistencies in slavery; he must be made to feel that slavery is right; and he can be brought to that only when he ceased to be a man.