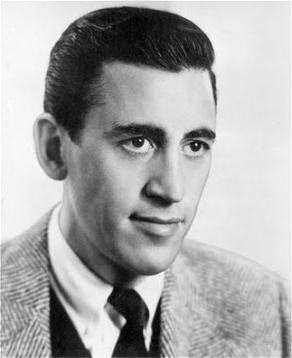 Jerome David Salinger is an American writer who is primarily known for his “The Catcher in the Rye” novel. The novel was primarily intended for the youth audience but is now popular among all age groups. Salinger’s books open to the readers a world of a naïve and delicate artist who reminds each and every one of us how important it is to love each other, to support each other, to respect and not dominate.

Jerome Salinger was born on January 1, 1919, in New York. In 1936 Jerome graduated from military academy in Pennsylvania. Despite the fact that he was a mediocre student, it was here that his writing career began. Salinger edited the yearbook of his class and was writing short stories in his room at night. Jerome also contributed a couple of line for his school’s anthem that is performed even nowadays.

In 1937 he attended lectures at the New York University, but never managed to graduate. He soon left the school and during 1937-1938 worked in Austria and Poland, as he was encouraged by his father to study the meat processing business. After leaving Europe Jerome spent some time at the Ursinus College in Pennsylvania. Here he also continues his sporadic writing efforts, writing columns and movie reviews.

Without obtaining a finished diploma at the Ursinus College, in 1939 Salinger frequented Columbia University. Here he loved the lectures on short story writing. These lessons were lead by an editor of the “Story” magazine. Whit Burnett even chose one of Salinger’s stories to be published in the magazine. The text was entitled “The Young Folks” and today it is considered Salinger’s debut in the grown-up writing world.

Jerome David Salinger didn’t manage to obtain a diploma or a finished degree from any of these educational establishments. He also didn’t demonstrate any outstanding results or talents there. His father was very disappointed because of this and their relationship worsened over years.

In 1942 Salinger was called to serve in the army. It is important to note that writer’s family was of Jewish origins. His grandfather was a rabbi and Salinger’s mother considered herself Jewish and even changed her name to Miriam from Marie after marriage.

In the army, Salinger served in multiple divisions: from interrogating soldiers at the counter-intelligence units to entering into the liberated concentration camps as Staff Sergeant. He experienced an incident of posttraumatic stress and his daughter recalled him telling to remember the war as vividly as if it happened yesterday.

After his writing debut in 1940 in “Story” magazine, Salinger kept knocking on the door of American publications, but, unfortunately for him, “The New Yorker” rejected a good deal of his texts. His next big publication was in 1948 when “A Perfect Day for Bananafish” appeared in “The New Yorker”. It was a story about one day in a life of Seymour Glass and his wife Muriel.

Holden Caulfield, the protagonist of the novel, studies at school and lives in a dormitory. He dreams of escaping from his everyday life. He wants to live by nature and do more things himself. He isn’t a bright student, but he wants his sister to study harder. He is kind, knows how to have fun, laughs a lot, always eager to help others, especially children.

His internal chaos, inability to adapt to the circumstances in life, idealistic mindset inevitably makes the reader worried about Holden’s future. The writer managed to make each reader feel a part of Holden’s destiny and life. Salinger reminded the youth and the adults that everybody who enters this life needs to be loved and supported. The writer also teaches his young readers to think carefully about their actions, learn from others and find their purpose in life.

By the time “The Catcher in the Rye” was published, 26 of Salinger’s stories and essays already appeared in various magazines and newspapers. Seven of them will appear again in the “Nine Stories” book (also known under a title of "For Esmé—with Love and Squalor" in Europe). This collection earned high review and was a commercial success for the author.

In 1965 Salinger published “Hapworth 16, 1924” which will become his last published novel. This book will close the cycle, as some may say, because the text is narrated by a young Seymour Glass, who will later become the protagonist of Salinger's other novels. The author has inserted a good amount of his own critique and comments regarding other writers and their works.

After 1965 Salinger stopped publishing and almost disappeared from the public eye. All his publications after “The Catcher in the Rye” were composed of works that appeared earlier in magazines. He stopped a couple of publications of his earlier works and letters. In these years Salinger continued practicing Zen Buddhism and a number of other spiritual practices that he got to know since the 1940s. The Catcher in the Rye

What really knocks me out is a book that, when you're all done reading it, you wish the author that wrote it was a terrific friend of yours and you could call him up on the phone whenever you felt like it. That doesn't happen much, though.

Don't ever tell anybody anything. If you do, you start missing everybody.

Among other things, you'll find that you're not the first person who was ever confused and frightened and even sickened by human behavior. You're by no means alone on that score, you'll be excited and stimulated to know. Many, many men have been just as troubled morally and spiritually as you are right now. Happily, some of them kept records of their troubles. You'll learn from them—if you want to. Just as someday, if you have something to offer, someone will learn something from you. It's a beautiful reciprocal arrangement. And it isn't education. It's history. It's poetry.