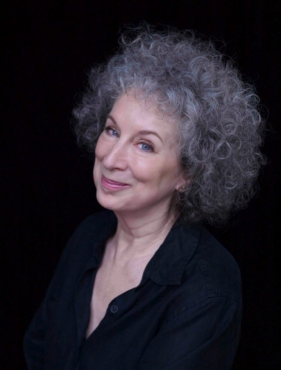 Mrs. Atwood is known worldwide as a literary genius of Canadian heritage. She isn’t simply a talented writer, she is also a skilled literary critic and a fierce environmental activist. She won numerous awards and prizes, founded different writing organizations, and patented a number of tools that help writers develop their talents.

In 2001 her name appeared on Canada’s Walk of Fame. Her books were translated into more than 20 different languages. Despite the fact, that the protagonists of Atwood’s novels are females, her dominant writing themes are universal: lost opportunities, broken relationships, ghosts of past times invading the present, ignorance and misunderstandings, and all other similar things that make the life of humans much more difficult than it should be.

Margaret Eleanor Atwood was born on November 18, 1939, in Canada. She was the second child in a family of a dietitian and an insect scientist. Her parents had three children and lived in very remote areas where their father conducted his studies of forest fauna. They also moved around the Northeast of Canada quite frequently. Due to these relocations, Margaret combined home studies with attending school until she was 8 years old. She graduated from high school in Toronto in 1957.

Atwood always liked reading and when her family was living in the backwoods of Canada she spent long hours swallowing fairy tales, comic books, detective stories and all other kinds of literature. The writer admits that her passion for writing evoked when she was six years old, but it was during the teenage years that she decided to make it her profession.

In 1961 Atwood obtained a Bachelor of Arts diploma from the University of Toronto (Victoria College) where she studied English literature, philosophy and French. In 1962 Margaret Atwood was awarded master title from a Radcliffe College in Cambridge, Massachusetts (USA). During 1965-1985 she worked as a teacher and a visiting professor at various Canadian and American universities.

In 1968 the writer married Jim Polk, but the marriage lasted only for 5 years. In 1976 Margaret gave birth to a daughter with a novelist Graeme Gibson, the girl was named Eleanor Jess Atwood Gibson.

Margaret’s experiences of living in remote areas and studying around outspoken female faculty members greatly influenced her writing. The themes of nature, glorification of the natural course of life and criticism towards overly materialistic interests in the society are vividly felt in her poetry collection “Double Persephone” (1961), as well as in “The Circle Game” (1966) collection of poems and “Animals in That Country” (1968). The “Double Persephone” is one of Margaret's first published books, which almost immediately was noticed by critics and gained its author the Pratt Medal.

Feminist influence is often reflected in Atwood's choice of characters: her first novel, “The Edible Woman” (1969) is an impeccable attempt to recreate the outward reality of the contemporary woman. Its protagonist, Marian MacAlpin, is a depiction of a “regular woman” that the society treats as a faceless individual. She drives herself to madness by uncontrolled thoughts but is set to regain control of her own life. The writer insists that the narrative was written before the feminism movement developed and should not be attributed to it.

At the beginning of 1970s Atwood actively participated in the renaissance of Canadian literature. She served as an editor of Anansi Press, was the president of the Canadian writer’s union, and worked as a caricaturist in an alternative political magazine “This Magazine”.

In 1970s Atwood published “The Journals of Susanna Moodie”. It is a poetic remake of autobiographic drafts written in the 1830s by first settlers in Ontario. In the book, their initial shock and fear of the wild nature turn into love and appreciation, not without sacrifices, of course.

The other poems that were brought together to form “Procedures of Underground” (1970) center on author’s studies of psychological space. “Power Politics” published in 1971 is often considered to manifest Atwood’s ironic feminism beliefs. In her second novel entitled “Surfacing” (1972) Atwood talks about the ruthless and mysterious nature that puts a moral dilemma in front of a human (who is a woman in the particular case of this plot).

Margaret Atwood exhibited great interest in myths, fairy tales and legends. In her attempts to revise traditional myths from the standpoint of feminism movement ideas, she wrote “You Are Happy” (1972). This collection of poems reminds the “ Odyssey” written by Homer, in the Antique times, but "You Are Happy" unfolds as if it were written by Circe (goddess with the ability to turn people into animals). The novel “Lady Oracle” (1976) describes in a surreal manner the debauchery and parody of cheap pseudo-gothic romanticism.

In the 1980s Margaret served as the vice-president of Writers Association of Canada. The writer openly engaged in public criticism of totalitarian regimes and censorship. Poetic collection “True Stories” (1981) and a novel “Bodily Harm” (1982) heavily explore the concepts of political turbulence, prison, torture, and lawlessness.

One of the most known creations of Margaret Atwood is the legendary dystopia “The Handmaid’s Tale” (1985). Its plot depicts a scary totalitarian society where patriarchal ways are the only ones that are right. It is a fictional world that was created by men with the assistance of women where both genders are deprived of freedom and happiness. Despite the fact that critics still struggle to define the genre for this story, today the book occupies a secure place among the classics of world literary heritage. It turned into a movie in 1990 and brought the author numerous prizes, including the Governor General’s Award.

Margaret Atwood continued to write after this great success and has produced plenty of novels and poems. Her long list of literary creations consists of such works as “Cat’s Eye” (1988), “Blind Assassin” (2000), "Oryx and Crake" (2003), "Moral Disorder" (2006) and many more.

At the beginning of the 21st century Margaret started to get involved in the writing technologies. She began with inventing a remote writing app that allowed her to sign a book on another continent using just a computer device connected to the Internet. She founded a company Unotchit Inc. (later renamed Syngrafii Inc.) that expanded its activities to include other kinds of remote writing solutions for writers and businesses.

As of 2018 Margaret Atwood resides in Canada and continues to participate in the life of literary communities, actively voicing her opinions on Twitter and via other modern communication channels.

Don't let the bastards grind you down.

Ignoring isn’t the same as ignorance, you have to work at it.

But who can remember pain, once it’s over? All that remains of it is a shadow, not in the mind even, in the flesh. Pain marks you, but too deep to see. Out of sight, out of mind.