in Tulsa, Oklahoma, The United States

For a long time, Susan Hinton remains one of the most popular and famous writers of adolescence literature in the USA. Many schools already introduced her works in their program, while there are some educational establishments that consider them inappropriate and banned from school reading.

Susan Eloise Hinton was born on July 22, 1948, in the United States of America. She was always fond of reading, but the kind of child and young adult texts available to her didn’t satisfy the writer’s eloquent taste and imagination. That’s what forced her to consider a career of the writer already when she was a student in high school.

Her first novel “The Outsiders” was published in 1967, when she only turned 19 years old. It is a story about a conflict between two street gangs. The writer said that she had put a lot of her personal experiences and emotions into this text. The book became popular right after its appearance and some 14 million copies were sold in the first decades.

After the appearance of “The Outsiders” Susan was on the height of her career. Many critics called her the voice of the teenage generation of America. The writer was overwhelmed by the high expectations imposed on her by the society and had a hard time writing new texts. The writing block intensified and Susan was getting depressed.

Luckily, with the support of her loving husband, she got over it and published a new book “This Was Then, This is Now” (1971). After the text was completed and sent for publisher’s review in 1970, her boyfriend at that time, who would literary make her write a couple of lines daily, finally got a chance to marry Susan.

In 1970 Susan Hilton married to a software engineer she met while still at school. His name is David Inhofe and the couple keeps a low profile life. After the marriage, Susan kept her last name, as these initials S.E. Hinton made her famous. In 1983 she gave birth to a boy Nicolas.

“This Was Then, This Is Now” plot follows the changing life of two boys, Mark and Bryon. Their relationship evolves as one of the boys gets involved in a romance, and the other one feels left alone, turning to dangerous habits teenagers tend to fall into. In 1985 the text will turn into a movie directed by Christopher Cain.

The author herself considered “This Was Then, This Is Now” to be a much more mature and masterful work in terms of writing. Writing only a couple of pages per day and battling her writer's block, Susan invested a lot of efforts in the wording and general coherence of the text.

In 1975 Hinton turned into a novel a short story that previously appeared in 1968 – “Rumble Fish”. The story begins with two old friends accidentally bumping into each other. Such encounter provoked many memories of the past. This short novel received a lot of controversial feedback.

The next book saw the world in three years and was entitled “Tex” (1979). It is a story of two brothers who have to take care of each other. They have to stand against the modern world that seduces them with drugs, violence, and drama.

In 1988 Susan obtained the Margaret Edwards Award. American Library Association awards this prize annually to the author whose texts touched upon the hearts of young readers and helped the adults hear the true voice and feelings of the youth.

10 years later, in 1998, Susan’s name was introduced in a Writers Hall of Fame of her alma mater, Oklahoma State University.

All of Susan’s works are easy to read and rich in meanings. They open the complex and diverse world of teenage life to both young and adult readers. These novels touch upon universal values. Some of the most vivid lessons Susan teaches her readers:

Susan Hinton name is closely associated with youth cinema as well. When in 1983 Francis Ford Coppola decided to make the screen version of her two most popular novels ("The Outsiders" and "Rumble Fish"), Susan played an active role in the process. She contributed to the script writing and even appeared in a secondary role as a nurse in “The Outsiders” movie, which was released in March of 1983.

Later, other of her novels, such as “Tex” and “That Was Then… This Is Now” were cinematized. Hilton continued to make an appearance in movies. The films were a starting point in a career of many young actors of that time: Tom Cruise, Mickey Rourke, Nicolas Cage and many others.

As of 2018 Susam Hinton lives in Oklahoma with her husband. They live privately to themselves, ride horses, and read a lot of literature pieces. She participates actively in the life of American writing community, contributing stories and scripts, editing books and appearing at public events. Susan remains loyal to her chosen genre of adult and children novels. 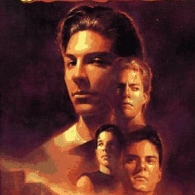 You get tough like me and you don't get hurt. You look out for yourself and nothin' can touch you...

Can you see the sunset real good on the West side? You can see it on the East side too.

Things are rough all over.