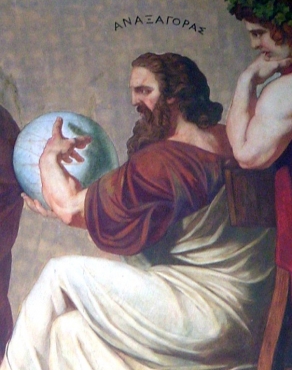 Greek philosopher, born in Clazamenae, Asia Minor (now Turkey). He lived in Athens and originated the idea that all things are composed of small particles, ‘seeds’ or atoms, the rearrangement of which was the cause of change, and he discovered the true cause of eclipses.

He also believed that the world was flat and that the sun was a hot and glowing stone. He was prosecuted for the latter affront to the belief in the divinity of the heavenly bodies. The universe of ‘seeds’, he claimed, was organised into its apparent form by an all pervading mind, nous. He taught *Pericles, *Euripides and other illustrious Greeks.