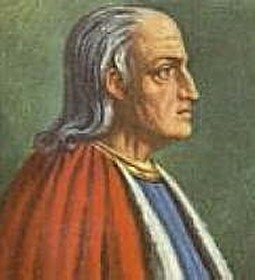 Italian theologian and prelate, born at Aosta, northern Italy. As his father objected to his becoming a monk it was not until c.1059 that he reached Lanfranc’s abbey at Bec, in Normandy, of which in 1078 he eventually became abbot. *Lanfranc, who had become Archbishop of Canterbury, died in 1089, and the see was left vacant until Anselm was appointed in 1093. His opposition to *William Rufus’s depredations of the church led to his exile in 1097.

He returned at the request of *Henry I in 1100 but while on the Continent he had become a convinced opponent of lay investiture and refused to do homage to Henry for his bishopric. This led to a further period of exile, but eventually in 1107 a compromise was reached.

Anselm, the leading theologian of his age, put forward the theory that faith and reason are not incompatible, he also advanced the ‘ontological argument’ that the very fact that man can conceive the existence of a supreme omnipotent Being must mean that such a Being exists. He was canonised in 1494.