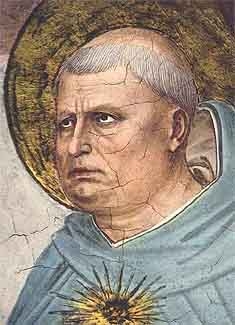 St. Thomas Aquinas (AKA Thomas of Aquin or Aquino)

GermanSicilian theologian and philosopher, born near Aquino, Italy. He became a Dominican and, despite family opposition, left Italy to study theology in Paris and later under *Albertus Magnus at Cologne. Although nicknamed by fellow students ‘The Dumb Ox’, he is now considered to have been the greatest systematic theologian of the Catholic Church. Except for study in Italy (1259–68) he worked and taught in Paris (1252–72).

Influenced by the philosophy of *Aristotle, he based his vast and clearly argued theology, now known as Thomism, upon it. He defended human reason as a source of knowledge of the natural world and also attempted to reconcile reason and faith.

He opposed the claim that a belief could be philosophically false but theologically true, and set out five proofs of the existence of God. After his death his work was decried by the Franciscans for its debt to pagan Aristotle, but it remains today an enthusiastically studied theology. Aquinas died on his way to the Council of Lyon and was proclaimed a saint in 1323 and a doctor of the Church in 1567. His remains are in Toulouse. Of his many writings, Summa theologica is the most comprehensive exposition of his system.