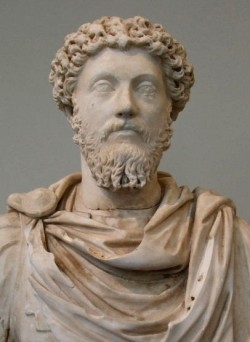 Marcus Aurelius was a Roman emperor and representative of late Stoicism. He is often called as “emperor-philosopher” or “philosopher on the throne.” He was the last one if the Five Good Emperors, which is a term coined by Niccolo Machiavelli to speak of the five rulers of the Nerva-Antonin dynasty.

Marcus Aurelius was born in an aristocratic family in Rome in 121 AD. The name he got at birth was Marcus Annius Catilius Severus. He got a great education. At the will of his grandfather, he studied at home. His philosophical views, deepened in the course of further education, influenced his lifestyle. From early years, he abstained from any excesses, eschewed entertainment, dressed in a modest raincoat and slept on the floor, having thrown animal skins on himself.

Marcus refers to Diognetus, who introduced him into philosophy and at the same time taught him painting. In spite of his young age, he was destined to become a quaestor, and six months after the death of Adrian, in 138, he entered the post of quaestor, that is, he began practically engaged in administrative activities. In the same year, he was engaged with Faustina, daughter of Emperor Antonius Pius, successor to Adrian on the throne. Antonius Pius adopted Marcus Aurelius and Lucius Verus, who became co-rulers of the Roman Empire after the death of the emperor.

Marcus Aurelius is remembered as a humane, highly moral emperor who bravely endured the vicissitudes of fate that had fallen to his lot. Being a Stoic philosopher, a man who hated violence and war, Marcus Aurelius was forced, nevertheless, to spend the most time of his reign in military campaigns, defending the borders of the state. In domestic politics, Emperor Marcus Aurelius paid the greatest attention to legislation, legal proceedings, and the establishment of order in the bureaucratic system. Aurelius attended meetings of the Senate, personally went to trials. In Athens, he founded four philosophical departments (according to the number of dominant philosophical trends). Marсгі Aurelius learned a lot from his adoptive father, Antonius Pius. Like him, Marcus Aurelius stressed his respect to the Senate as an institution and to the senators as members of this institution in every possible way.

In 178, the Roman army under the command of Marcus Aurelius made a successful campaign against the Germans but became a victim of the outbreak of the plague. This disease put emperor’s life to an end. Marcus Aurelius died in 180 in Vindobona (modern-day Vienna). After his death, he was officially deified. According to ancient historical tradition, the years of his reign are considered a golden age and Marcus Aurelius himself is one of the greatest Roman emperors. Later 12 writings of philosophical notes of the emperor were found and published. They were later named Meditations. This work is presented in the form of a diary, and it is assumed that it was written while the emperor was in Central Europe. It is thanks to Medidations that Marcus and received the title of philosopher. Being a representative of late Stoicism, Marcus Aurelius pays the greatest attention to ethics in his philosophy, while the remaining sections of philosophy serve the purposes of propaedeutics.