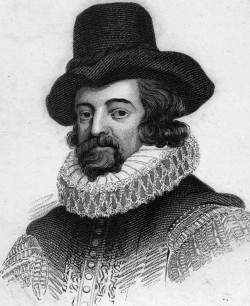 English lawyer, scientist, essayist and philosopher, born in London. His father, Sir Nicholas Bacon (1509–1579), was Keeper of the Great Seal to Queen Elizabeth, his mother an aunt of William Cecil, Lord Burghley. He attended Trinity College, Cambridge between the ages of 12 and 14, then studied at Gray’s Inn, London, spent a few years in diplomacy and in 1586 became a bencher of Gray’s Inn.

He was a Member of Parliament 1584–1617. He became a protégé of the Earl of *Essex but did not scruple to appear for the prosecution when Essex was tried for treason in 1601. Under James I, Bacon advanced steadily: in 1613 he became AttorneyGeneral and in 1618 Lord Chancellor with the title Baron Verulam. In 1621 he became Viscount St Alban but in the same year was charged with bribery and corruption. He insisted that gifts received had not affected his judgments, but he was imprisoned briefly and banished from court and parliament.

Side by side with his public life he followed his literary, scientific and philosophic pursuits. His Essays on such subjects as truth, adversity and death were first published in 1597 and issued in final form in 1625. His philosophic and scientific work was intended to summarise the state of knowledge so far attained and outline a method by which this knowledge could be renewed and advanced. The latter purpose is the theme of Novum Organum, written in Latin, published in 1620 and intended to be part of a great all embracing work The Great Instauration. His  method was a kind of tabular analysis of affinities and deviations by which he supposed scientific definition could be reached.

The definition of heat arrived at by his method ‘Heat is an expansive motion restrained and striving to exert itself in the smallest particles’ is near the truth but the method in general has not proved useful to later scientists. His great significance in the history of science lies in the stress he gave to the value of experiment and to the failure of scholastic methods to arrive at a true understanding of nature.

Other literary work includes The Advancement of Learning (1605) and The New Atlantis (1626), inspired by Sir Thomas More’s Utopia. The theory that Bacon was the real author of the Shakespearian plays was first proposed in print in 1856 (independently) by Delia Bacon and William Henry Smith and has generated a vast, self-deluding, literature.

Pope’s description of Bacon ‘as the wisest, brightest, meanest of mankind’ is probably unfair, but it is certain that a lack of moral fibre prevented him in times of crisis from living up to his best intentions.