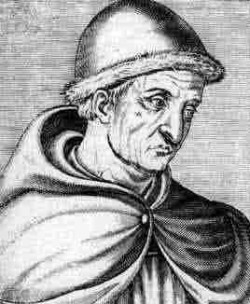 English scientific philosopher, born according to one tradition near Ilchester, Somerset, and to another at Bilsey in Gloucestershire. Though probably educated in Oxford the first certain date in his career seems to be 1236 when he was studying in Paris.

In or after 1251 he returned for a time to England and it may have been then that he joined the Franciscans. For 10 years from 1256 he seems to have been in France suffering from ill health and writing little. The last years of his life were spent at Oxford. Roger Bacon was a man of great learning and wrote much (e.g. the vast Opus Maius, 1267–68), on many subjects, but as a systematiser rather than an originator. In philosophy Aristotle provided the basis of his philosophical studies as he did for those of all medieval philosophers.

His probings into more arcane subjects such as alchemy were in line with the thought of his time. Some of his opinions and speculations evidently incurred the disapproval of his superiors but of his actual imprisonment the evidence is insubstantial. His popular image was, however, that of a necromancer. It is in experimental science that he produced real achievement, especially in optics. He remains, however, one of the greatest expounders of medieval knowledge and thought