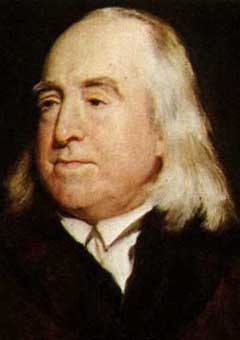 English utilitarian philosopher, born in London. Son of a solicitor, he was a precocious and prodigious student. After graduating from Oxford in 1763, he studied law under Blackstone but was dismayed by its anomalies and illogicalities and thus abandoned the idea of going into practice.

The publication of his Fragment on Government in 1776 brought him to the friendly notice of Lord Shelburne, at whose house, by meeting people from the social and political worlds, he was able to gain self-confidence. In 1789, after four fruitful years of travelling in Russia and elsewhere, he published An Introduction to the Principles of Morals and Legislation, which argues, following Priestley, that all laws should work for the greatest happiness of the greatest number of people, and sets out a general doctrine of Utilitarianism, which inspired J. S. Mill and others. He believed that all men seek only their own pleasure, and combined this psychological claim with the moral view that the right action is that one which seems likely to produce more happiness (pleasure or absence of pain) than any other possible action.

Utilitarianism, modified by his followers, was the source of much social investigation and reform in the 19th century. In 1785–88, Bentham spent much money and time on a plan for a model prison, the ‘Panopticon’, in which all prisoners could be observed from a single point. Reform and codification of the law to accord with his utilitarian principles remained his chief interest, but in later life he campaigned for a number of specific reforms: the secret ballot, universal suffrage, abolition of capital and corporal punishment, a national system for registering births, deaths and marriages, the ending of transportation of criminals and imprisonment for debt, and the setting up of an international authority to prevent the outbreak of wars.

He attacked the idea of ‘natural’ or ‘universal’ human rights as an abstraction (‘nonsense on stilts’), insisting that rights and responsibilities had to be linked to specific structures and attitudes in societies. He founded the Westminster Review in 1823, and was also a founder of University College, London, where, at his wish, his skeleton sits, dressed in his clothes and with a model head.