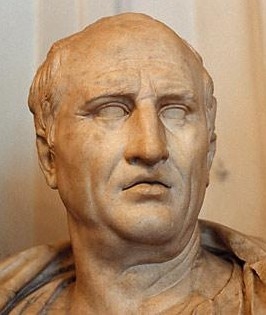 Marcus Tullius Cicero, born in 106 BC in Arpinum near Rome, was a great Roman philosopher, politician, orator, and lawyer. Being the son of a well-to-do landowner, he was the first to achieve the Roman office and become the consul among the whole family. His father’s library was the place where he began studying the writings. From the young age he was deeply interested in public speaking and philosophy, so his father sent him to the best educational establishment possible to develop the rising talent of a young boy. The knowledge of both Greek and Latin and a passion for philosophy forced him to translate the greatest Greek philosophers to present them to a wider audience.

Being a strongly intellectual personality, Cicero had no interest in military actions, though he took part in the Social War (90-89 BC). In the time of civil wars, he decided to pursue a political career, which became his number one priority for the rest of the life. His first case as a lawyer was defending Sextus Roscius, charged with patricide. The accused was justified, and Cicero’s reputation benefited a lot from this case, especially given that powerful politicians were in opposition.

In 63 Cicero was elected consul and became the youngest man ever to achieve this position without coming from a political family. On this position, he was responsible for conspiracy in Catiline, which objective was to take over the Roman state. Because of the refusal to join the alliance of Caesar, Crassus, and Pompey, he was sent to an exile in which he couldn’t engage in politics. In the meanwhile, he studied with the best orators in the region and decided to devote himself again to philosophy. After ending the exile, he worked as a lawyer to pay the debt to the triumvirate and wrote On the Orator, On the Republic, On the Laws.

Cicero chose the side of Pompey in his conflict with Caesar but was pardoned by Caesar when he won and was allowed to come back to Rome. Although Cicero was not a part of collusion to assassinate Caesar, he celebrated it quickly after. Meanwhile, Cicero attempted to make an alliance with Mark Antony who after a while declared Cicero a public enemy and gave the order to kill him. Soldiers cut off his head and hand and displayed them in Rome. This was an act of revenge for all of the writings and speeches of philosopher against Antony.

It is a fact that the impact of Marcus Tullius Cicero can still be felt over the centuries. It was because of him that the thinkers of the Renaissance and Enlightenment discovered the riches of Classical rhetoric and philosophy. His legacy is more than 900 letters, a number of poems, 58 orations; writings are now a precious source of information to us about the events of that era. While Cicero the humanist deeply influenced the culture of the Renaissance, Cicero the republican inspired the United States’ Founding Fathers and the revolutionaries in France.