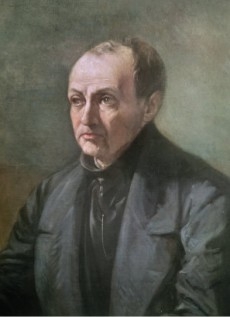 August Comte was a French philosopher, known above all for being the founder of positivism, the first philosopher of science and introducing the new subject ‘Sociology’ that he divided into two categories – social statics, which force people together, and social dynamics, which bring about social changes.

August Comte was born in 1798 into a strict Catholic family in Montpellier, France. He received a highly progressive science-based education in Lycée Joffreand then the University of Montpellier. His family violently disagreed with his passions for science and rejection of religion and broke ties with him. In 1814, he became a student of École Polytechnique but left before graduating, so was forced to provide for living teaching journalism and philosophy. In Paris, he met Henri de Saint-Simon and became his student and later a secretary. Their partnership ended because of Comte’s quarrelsome nature, but Saint-Simon’s influence can be noticed even after their argument. 1826 was the year when August Comte began the series of lectures on positivism, but he soon suffered a serious mental breakdown that led to hospitalization. He left the hospital without being cured, and even attempted to commit a suicide, but his wife, Caroline Massin that he married in 1824, helped a lot in his full recovery so in 1829 the second period of his life and career path began.

In the following years, August Comte published his Course of Positive Philosophy, in six volumes, taught mathematics and mechanics in École Polytechnique. In 1842, he was dismissed from his post because of some disagreements with administration and separated with his wife. Later he met Clotilde de Vaux and the couple was madly in love with each other, but could not be together because she was married. His other major publications are Discourse on the Positive Spirit (1844), A General View of Positivism (1848) and Instituting the Religion of Humanity (1851-1854, four volumes)

August Comte is also known to be the founder of the ‘religion of humanity,’ a secular worship with no God or anything supernatural. This religion was present in two volumes – The Summary Exposition of the Universal Religion and The Theory of the Future of Man. He observed that traditional faiths had something of a schedule of who and what to think about, so he invented his own calendar, where each month was devoted to an important field of an endeavor, e.g., marriage, parenthood, art, science and each day to one remarkable person in a particular field. Since the architecture played an important role in religions, he suggested building ‘temples of humanity,’ in which lectures, singing, public discussions, and celebrations would be held. The so-called church was supposed to be decorated with works of arts, portrays of inspiring people, and a quotation ‘Connais toi pour t’ameliorer,’ French for ‘Know yourself to improve yourself.’

Comte died of stomach cancer in 1857 and buried in the Pere Lachaise Cemetery in Paris. His works influenced such social thinkers as Karl Marx, John Stuart Mill, and George Eliot. Years after his death his religion made some considerable advances. The Chapelle de l’humanite was opened and remains a place for secular baptism, wedding and funeral services.