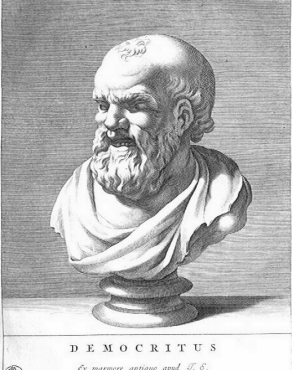 Democritus (born at Abdera, about 460 BCE) was a Greek philosopher also famous as the “Laughing Philosopher” for his resilient and comical attitude to life. There is also an assumption that people called him “The Mocker” because he used to laugh at others’ foolishness. Although both stories cannot be proved as facts.

There is little information about Democritus’s life. His father was from a well-to-do and noble family and is believed to receive the Persian king Xerxes that left a few magi (wise men) in gratitude for the warm reception. Those magi according to the story taught Democritus theology and astronomy. After his father’s death, he spent the inheritance to travel to different countries, such as India, Egypt, Ethiopia, Persia, and Babylon. There is a possibility that during his travel around Greece he met such prominent personalities as Socrates, Hippocrates, and Anaxagoras, whose works he bought because of his wealth. When he returned to his homeland with no money, he gave public lessons in order to provide himself for a living and decided to live with his brother, Damosis. There is another unconfirmed story that in old age(according to different sources he lived for 90 to 100 years) he blinded himself with the burning glass to quit from distractions of the outside world and dedicate himself entirely to science. But this is probably a fiction, because he studied plants and minerals, wrote books and dissected animals that definitely requires sight. Unfortunately, none of Democritus’s works survived, whether because of Plato, who despised him and collected all his works he could find to burn them or because of the ability of time to destroy material things, especially paper.

Leucippus is believed to be a mentor of Democritus, although there is no exact evidence that he actually existed. Both of them are credited with the invention of atomism. This theory held that everything consists of atoms, which are physically inseparable and indestructible. He also suggested that atoms are always in motion and there is empty space between them. Unfortunately, it is hard to distinguish Democritus’s contribution to the atomic doctrine apart from Leucippus, but he was definitely a major figure in its development.

In the field of Epistemology, he proposed two types of knowledge. One is ‘bastard’; it is subjective and obtains through the senses. Another one is ‘legitimate’ knowledge that is genuine and obtains through processing of the ‘bastard’ knowledge. In ethics, he was dedicated to hedonism and posited a supreme good as an internal state of mind and called it cheerfulness or well-being. He produced such works as On Numbers, On Geometrics, On Irrationals in the field of mathematics and geometry, but unluckily they did not survive. One of his achievements in astronomy is that he was the first to discover that Milky Way is actually formed from the light of stars, even though Aristotle and other philosophers argued that. He also suggested that the universe consists of many more worlds and some of them can be even inhabited.