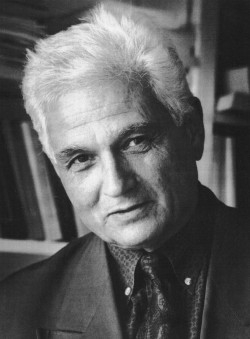 Jacques Derrida was one of the most prominent philosophers of the 20th century known above all as a founder of deconstructionism. His works were rather difficult to apprehend, sometimes even challenging for common sense, but he deliberately stepped away from such movements as existentialism, phenomenology, and structuralism, very popular at the time, and eventually became one of the most important contemporary thinkers.

Jacques Derrida was born in 1930 in Algeria in a Jewish family and was the third of five children. He was expelled from two schools on a religious basis – once on the account of anti-Semitism and the second time because of 7% quota for Jewish pupils at school. Being a child, his dream was to become a football player but when was introduced to the philosophical world through the works of Friedrich Nietzsche, Jean-Jacques Rousseau and Albert Camus, he seriously took into consideration engaging in philosophy. In the late 1940s, he studied at Lycée Louis-le-Grand in Paris. His education continued at École Normale Supérieure, a prestigious school for the greatest minds of the time, which he was admitted to in 1952 after failing an entrance exam twice. After completing his master’s degree in philosophy, Derrida received a grant from Harvard University and therefore moved to the United States where he met his future wife, Marguerite Aucouturie. In 1957, he had to go to Algeria for military service but chose to teach soldiers’ children instead. After the war, Jacques Derrida was teaching philosophy in Sorbonne and École Normale Supérieure. 1965 was the year when he partnered with Tel Quel – a group of avant-garde philosophers and writers. Of Grammatology, Writing and Difference, and Speech and Phenomena were the first books he published and the works that drew attention to Derrida in the field of philosophy. ‘Deconstruction,’ ‘aporia’ and ‘logocentrism’ are the three terms commonly associated with his name. Deconstruction has often been misunderstood, but basically it means wrecking our excessive loyalty to any idea and learning to see the aspects of the truth that might be buried in its opposite. This concept can be found not only in philosophy and literary but in music, architects, filmmaking, among lawyers, historians, and political theorists.

During the 1970s, Jacques Derrida produced Glas and The Post Card: From Socrates to Freud and Beyond. In the following decade, he published Of Spirit: Heidegger and the Question and Spectres of Marx.

Derrida engaged in many political movements and issues – disapproval of the Vietnam War, support for the Parisian student protesters in 1968, protests against the death penalty and many more.

It is a common practice to examine and criticize the concepts and works of the philosopher, but in case of Jacques Derrida, it was often too harsh and unjustified, that even after Cambridge University proposed to award him an honorary doctorate, they had to put to the vote this decision, which Derrida won. Despite the controversy around him, he definitely was an outstanding figure of the previous century. There are a lot of books and articles, dedicated to his works, documentary and even a song about him, and his ideas remain a powerful force in the modern world.