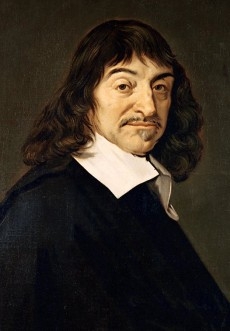 Rene Descartes was a French 17th-century philosopher, mathematician and scientist famous above all for saying “I think, therefore I am.” But what makes him stand out is that he was a rationalist, in the meanwhile other philosophers were still arguing about different matters regarding God. He is also credited with being the father of modern western philosophy.

Born in 1596 in La Haye en Touraine, he was the third son in the family. His mother unfortunately died when Rene was not even one year old, and his father sent the children to their grandmother, where they remained even when he married again. But because of father’s concern, at the age of 8, Rene was sent to Jesuit College, where he studied for seven years. He was rather a sickly student and even was allowed because of this to stay in bed until 10:00 am, while others’ day used to start at 5:00 am. Some of his subjects were rhetoric, arithmetic, geometry, astronomy, dialectic and gave him a push to become a philosopher. The life of Descartes after the college is documented rather vaguely, but it is known that he got a degree in law at the University of Poitiers. He is also believed to have a mental breakdown during that time. In the summer of 1618, he has been to the Netherlands as a volunteer for the army of Maurice of Nassau. In the meanwhile, he got familiar with Isaac Beekman, who had probably the most influence on Descartes’ early life. His first surviving work Compendium of Music, written in 1618, was dedicated for Beekman.

It was 1619 when Descartes invented analytic geometry and devised a universal method of deductive reasoning. 1828-1849 years were the most productive in his life, although he changed 14 places of living. The most famous of his works include Discourse on the Method (1637), his first rationalist vision of the progress of human knowledge; Meditations on First Philosophy (1641), a more formal exposition of his central dogmas, so he spent most of his remaining life defending his positions; and Principles of Philosophy (1644), an even more systematic and comprehensive description of his views. During his stay in Stockholm, Sweden, in 1650, where he had been a personal teacher of Queen Christina, he died of pneumonia.

with other merits, Descartes is credited to be a major figure in 17th century Aristotelianism, Rationalism, and Scholasticism, the founder of the Cartesian coordinate system, crucial to the invention of calculus and mathematical analysis. ‘Cogito, ergo sum’, or already mentioned ‘I think, therefore I am’, which can be found in his Principles of Philosophy, comes from his arguments about the existing of thought and is the answer for all those wondering, if they really exist, because the existence of thought means your existence. Other major works by Rene Descartes include Compendium Musicae (1618), The Word (originally Le Monde, published posthumously in 1664), L’Homme (published posthumously in 1662), Discourse on the Method (1637), Geometry (1637) and the Passions of the Soul (1649).