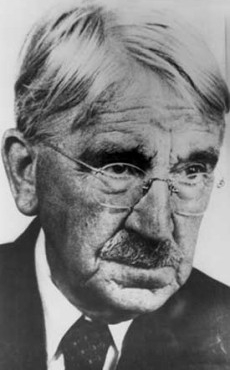 John Dewey, born in 1859 in Burlington, USA, was a 20th-century philosopher, psychologist, one of the founders of pragmatism, functionalism and a prominent figure in American education movement. His numerous articles on important social matters made him one of the most influential social commentators of his time.

Dewey was the third son out of four in a modest family of a father who was a merchant and a deeply religious Calvinist mother. His father took part in the Civil War and after return opened a tobacco shop that made him able to provide a comfortable living for the whole family. He went to Burlington boarding schools and then at the age of 15 he was accepted to the University of Vermont. Around that time, he became passionate about philosophy, partly thanks to his mentor H.A.P. Torrey. He graduated second in class, but then he interrupted education and accepted his cousin’s proposition to work as a teacher in high school in Oil City, Pennsylvania. While teaching in Vermont, his passion for philosophy and psychology grew. Dewey continued his education at Johns Hopkins University and got there Ph.D. in philosophy in 1844. After that, he got a position of assistant teacher at the University of Michigan that he held for almost ten years. Here he met his future wife Harriet Alice Chipman that he married in 1886. The couple had six children and adopted one.

In 1894, John Dewey joined the University of Chicago as a head of the philosophy department. During this time, he produced four essays together entitled Thought and its Subject-Matter. His career of professor continued in 1904 in the Columbia University, one of the Ivy League universities. 1903 was the year when Dewey started University of Chicago Laboratory Schools, where he was able to implement his pedagogical beliefs. The school aimed at developing children's educational abilities and satisfying their needs. Dewey’s approach required to take into account the main impulses of the natural growth of the child: social (needs in the game and motion), research (the need for knowledge and understanding of things), expressive (the need for self-declaration). Of particular importance was labor training, since he believed that in the process of manual labor, children acquired the experience they needed. Dewey was also president of the American Psychological Association. In 1930, he retired from his teaching career. Josh Dewey died of pneumonia in 1952.

John Dewey wrote approximately 700 articles and 40 books. Dewey’s major publications were The Reflex Arc Concept in Psychology (1896) where he criticized the standard concepts in psychology and laid out the basis of his work; Democracy and Education (1916) where he praised progressive education; Freedom and Culture (1939), an analysis of the origins of fascism.

Dewey was a central figure in Pragmatism. John Dewey, representing one of the areas of pragmatism, the so-called instrumentalism, argued that any theories or ideas, if useful to the individual, are to be regarded as an instrument to achieve the ideal of "good life." He was convinced that education should be based on hereditary data and on the instincts and practical experience of the child. In his opinion, the essence of education led to the continuous expansion of this experience.