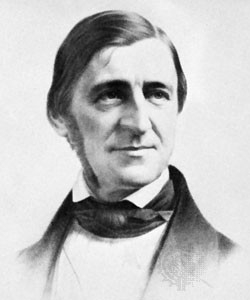 Ralph Waldo Emerson is an American philosopher, one of the greatest thinkers in the United States, a writer, poet, essayist, leader of the movement of transcendentalism, the first who formulated his system of ideas.

Emerson was born in 1803 in Boston, Massachusetts in a family of a Unitarian minister. Ralph Waldo intended to follow his footsteps, completing first theological seminary, and then in 1821 Harvard University. Being the holder of theological education, Emerson became a priest and preached in the Boston community of Unitarians. During his study in Harvard, Emerson was forced to work on different temporary jobs to be able to pay for tuition fee. In 1829, Emerson married Ellen Tucker, who was 18 years old at the time, but tragically died of tuberculosis in two years. The death of his loved one, along with the development of his ‘faith in soul’, made him resign from his position. In the future, people would call him Atheist, especially after address speech in Harvard School of Divinity.

In 1832, Emerson sailed for Europe, visiting Italy, France, and Britain, where he got acquainted with Samuel Taylor Coleridge, Thomas Carlyle, and William Wordsworth. It was through those prominent writers of that era that Ralph Waldo Emerson got interested in transcendentalism. Carlyle had the most influence on Emerson, and they kept corresponding each other for the next 50 years. After the return to the United States Emerson began to challenge the traditional thought and got fully involved in his own philosophical ideas. In 1833, he gave his first lecture. In the future, he would give approximately 1500 lectures, in which he would discuss the most important ideas and beliefs of his philosophy and significant for him matters.

1835 was the year when he via letter proposed to his second wife, Lydia Jackson. The couple had four children; one of two daughters was named after Emerson’s first wife, at Lydia’s suggestion.

Emerson became known as a central figure in the Transcendental Club, among its co-founders Frederic Henry Hedge, George Ripley and George Putnam. The group emphasized on the spiritual experience and intuition and that everything in this world is a microcosm of the universe. Nature (1836) was his first book and probably the best representation of his transcendental ideas. In 1842, The Dial, a journal of the club, came out and Emerson was one of the editors of it. Ralph Waldo produced a lot of works, regarding both Transcendentalism and other ideas. His major works are Essays, First and Second Series (1841, 1842), in which he included his most famous and influential work Self-Reliance, where he guides people to trust their own judgment; the lecture-based American Scholar encourages writers not to imitate foreign colleagues and find their own style.

Emerson’s last years were rather difficult due to troubles with the memory and was forced to stop giving a lecture because of the embarrassment he felt when he forgot something. Philosopher died of pneumonia in 1882. The influence of Emerson on the development of American thought and literature is difficult to overestimate. Liberals of his generation have recognized him as their spiritual leader. He influenced H. Thoreau, N. Hawthorne, and H. Melville. The most "American" of all philosophical schools, pragmatism, shows a clear proximity to his views. Emerson's ideas inspired the "modern" trend of Protestant thought. Emerson won the sympathies of readers in Germany, having a profound influence on F. Nietzsche.