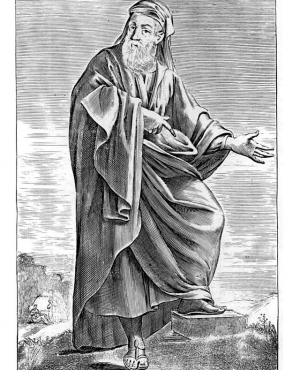 Empedocles lived in Acragas (Agrigentum)on the shores of Sicily. This is a city that was one of the great Greek trading towns on the Sicilian coast. The exact dates of birth and death of Empedocles are unknown. Some ancient authors claim that he lived 60 years, others - more than 100 years. According to some sources, the certain date of his life is attributed to the 84th Olympiad (approximately 444 B.C.). According to Diogenes Laertes, Empedocles came from a noble family, supported the side of democracy, reached a high position in it and tried hard to assert the young democratic system in Agrigento. The originality of Empedocles, excluding science, lies in his teaching of the four elements and the application of the principles of Love and Strife to explain the change.

There are many obviously fantastic stories about the life and work of Empedocles. But it is difficult to separate true from a false one. In legend, Empedocles appears as a sage, as a physician and miraculous creator of inhuman power. The activities of Empedocles were as wide as the activities of the first philosophers of the Milesian School: Empedocles entered the history of Greek culture as an outstanding philosopher, poet, master of the oratorical art, and the founder of the school of eloquence in Sicily. Aristotle says that Empedocles first invented rhetoric and that he could speak well, using metaphors and other means of poetic language.

Empedocles is probably the last Greek philosopher that wrote in verse, but unfortunately, only a few hundred lines from two poems survived to our days. However, there are still disputes about which lines belong to which poems or even if they compose one integral work. There are 100 lines from Purification, which tells us about souls that punished ones moved from one body to another; and about 340 verses from The Nature, where he describes the theory of four elements, perception and thought and explains different biological processes.

Empedocles studied biological and physiological phenomena, developed a number of hypotheses associated with them. He became famous as the founder of the famous medical school in Italy. With all exaggeration, all of those stories suggest that Empedocles impressed his contemporaries with the breadth of views and ingenuity in solving complex practical problems. He is known above all for originating the cosmogenic theory, which stated that everything in the world consists of four key elements – fire, air, water, and earth (which he named ‘the roots’). Empedocles also taught that there are two supernal powers, Strife, and Love, that pervade the universe and can be seen in human behavior. Love makes the four elements mingle together, and Strife separates them.

Empedocles was a believer in reincarnation, thus he was a vegetarian because he believed that punished souls dwell in animals’ bodies. The circumstances of his death are rather interesting. There is a legend, recorded by Diogenes Laërtius, that Empedocles threw himself into the Mount Etna, a famous volcano in Sicily, to prove everyone that his body vanished and he turned into a god.