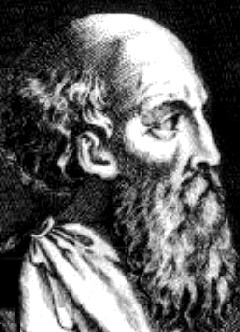 Epictetus was a Greek Stoic philosopher. Though he was born as a slave, he became one of the most influential thinkers and teachers of Stoicism of his time.

Epictetus’ biography is rather vague. He was born in Hierapolis (modern-day Pamukkale, Turkey) around 55 A.D. under the unknown name (Epictetus in Greek means “gained” or “acquired” and was given to him because he was a slave). He was a bondsman to Epaphroditos, a well-to-do freedman and Nero’s secretary. At a young age with his owner permission he studied philosophy under Musonius Rufus. This gave him the opportunity to grow more educated. He was crippled, and there are two different stories about this.

The first one tells that his master broke his leg when Epictetus was still a slave, but there is also an unconfirmed suggestion that he was lame from the young age because of rheumatism. It is unknown who gave him the freedom approximately after the death of Nero, but after this, he started teaching philosophy. When the Roman emperor Domitian in 94 issued a decree to expel all the philosophers from Rome, avoiding danger and fearing for his own life, Epictetus was forced to flee to Nicopolis on the Balkan Islands, where he eventually created a philosophical school. Wise speeches, sincerity, and eloquence of Epictetus conquered his followers; many noble Romans came to listen to him.

During his life, Epictetus did not write anything. Only thanks to his pupil Arrian we can discover his teachings. Arrian composed the Discourses and the Handbook from his lecture notes. Arrian stated that "whatever I heard him say I used to write down, word for word, as best I could, endeavouring to preserve it as a memorial, for my own future use, of his way of thinking and the frankness of his speech."

It should be noted that Epictetus preached and led a life of great simplicity, having in his possession only a few things. Therefore, a personal example for everyone was even more important for Epictetus than the theory, often preached by the philosopher. While Stoicism tries to reduce philosophy to ethics, such a trend to Epictetus gets a logical ending. The severity of his moral rules and allegiance to the principles of noble poverty caused great respect for him not only among contemporaries but also following generations. Epictetus was a pagan, but his ideas were in many ways similar in spirit to the Christian worldview, and therefore in the first centuries of the new era the works of this thinker were widely circulated in monasteries.

According to Epictetus, the main task of philosophy is the emancipation of man and thereby helping him in finding happiness. To become happy, it is necessary to understand correctly what is in the power of the person, and what does not depend on him. Something external and independent should not enslave his spirit, all this a person should treat with indifference. As Epictetus said, the recipe for happiness is not to dream of subordinating the course of events to one's desires, but of adapting itself to events.