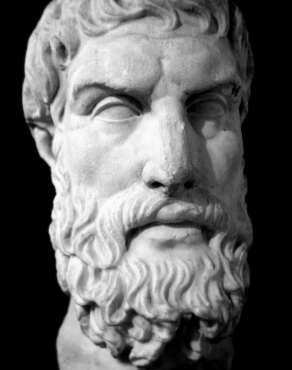 Epicurus was a Greek philosopher and the founder of the philosophical school of Epicureanism. His main goal was to find the answer to an extremely difficult question – what makes people happy. His influence can be felt in teachings if such prominent figures as Friedrich Nietzsche, Margaret Cavendish, Thomas Jefferson, John Locke and others.

Epicurus was born in 341 B.C. on the Samos island in the family of Neocles and Chaerestrate, who were both Athenian-born, but emigrated ten years before Epicurus birth. There is not much information, regarding philosopher’s life, but we know that he studied philosophy for about four years under Pamphilus, a Platonist teacher. He also spent two years on a military service in Athens and then joined his family in Colophon. Here he proceeded his education under Nausiphanes, a Democritus follower. However, Epicurus denied the influence of his teachers or other thinkers on his philosophy and emphasized on being self-taught. For some time he was a teacher in Mytilene but had to leave because of some disagreements. When he moved for a permanent stay to Athens, Epicurus founded the Garden, a philosophical school and the place for meetings. An interesting fact is that this school was accessible not only for thinkers but for all who were desperate to live and wanted to find consolation in thinking. Epicurus died of kidney stones in 271 or 270 B.C.

Epicurus was a productive writer, but only three letters (to Herodotus, Pythocles, and Menoeceus) survived to our days in Diogenes Laertius’ book Lives of Eminant Philosophers. These letters summarize his ethics, metaphysics and atomic explanations to different meteorological phenomena. Two series of quotes are also available to the public: The Principal Doctrines and the Vatican Sayings. A lot of beliefs of Epicurus were reconstructed by Cicero and Lucretius, though the reliability of their interpretation must be taken carefully because they were hostile to the ideas of Epicureanism.

Epicurus was a follower of Democritus, who substantiated the theory of atomism. For Epicurus matter was eternal. He said that there is an infinite number of atoms, and therefore the worlds. Epicurus believed that atoms are in a constant disorderly movement and often deviate from their usual trajectory. The philosopher rejected fatalism and advocated freedom of reason, believing that man can control the course of his life, without depending on the whim of fate. Epicurus denied the immortality of the soul, he believed that it would eventually be disintegrated in the same way as the body. However, the recognition of the finiteness of human existence does not mean that it is impossible to overcome the fear of death.

Talking of happiness, Epicurus announced a revolutionary set of insights that you really need only three things to be happy in this life: friends (he emphasized that you have to see them regularly), to stop working for other people, and to live a life with no pain and find calmness in their own mind instead of different external factors. Epicurus chose to stay out of politics since they usually cause troubles and attract much attention, which is not suitable for a simple life.