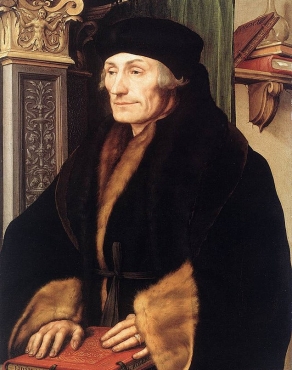 Desiderius Erasmus Roterodamus was a Dutch philosopher, theologian, priest, teacher and Renaissance humanist (also called ‘The Prince of Humanists’) known above all for being one of the greatest thinkers of Europe, a believer in freedom of choice and the translator of The New Testament into Greek that caused a theological revolution.

Most of the historians agree that Erasmus was born in Rotterdam in 1466. In 4 years his family moved to Gouda, where his father, Gerard, was serving as a Catholic priest. There is not much information about his mother Margaret Rogerius, a daughter of a physician, but it seems that the parents were not married and had another older son. Erasmus received the best education possible in a few monastic schools, particularly one in Deventer, which he entered at the age of nine. The exclusiveness of this establishment lied in the fact that it was the first school to have Greek in its curriculum.

In 1483, Erasmus’ parents died of the plague. He could not provide himself for a living; therefore, he joined the canonry of Stein in 1486 and eventually was ordained a Catholic priest in 1492, but there is no evidence that he had ever worked as a cleric. While in Stein, he is believed to be in love with his fellow monk, whom he wrote a series of letters. However, it is still unsure whether the two were just friends. Erasmus’ skills in Latin and writing letters gave him an incredible chance to become the secretary of Henry of Bergen, the Bishop of Cambrai, whose stipend allowed him to study at the University of Paris. At that time, he got involved with Renaissance humanism and became famous as a prominent lecturer and scholar. His own will and the financial support of William Blunt, one of his students, enabled him to remain independent in his beliefs, even though he was offered positions of honor and profit throughout his life.

At the beginning of 16th century, Erasmus was convinced into teaching theology at Cambridge. Meanwhile, he produced his best-known essay The Praise of Folly, where he satirically attacks superstition and other beliefs of both western Church and European society. The other work that brought him recognition was the New Testament, translated into Greek and Latin. Martin Luther used the Latin version in his translation of the Bible into German. These two influential figures had a mutual admiration, but later Erasmus criticized Luther’s methods in De libero arbitrio, though he supported Protestant ideals.

The life of Desiderius Erasmus of Rotterdam ended in 1536 in Basel from an attack of dysentery. Remaining loyal to the Church of Rome, he did not receive last rites or some time with the priest, which reflected his beliefs in direct relationship with God. Erasmus was not the founder of any philosophical school, but he definitely expanded the boundaries of philosophy. His legacy consists of a considerable number of translations of worlds’ greatest minds, educational establishments are named after him, the European Union's Erasmus Programme is the most popular scholarship among students.