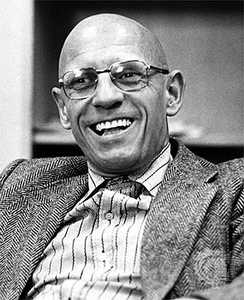 Michel Foucault was a French philosopher, historian and cultural theorist, an outstanding representative of modern French structuralism (although he rejected being associated with this label) and an intellectual figure of the European and world level.

Michael Foucault was born in 1926 in the city of Poitiers, France. His father was a well-to-do surgeon and expected his son to follow in his footsteps, but Michael felt strongly against that. His early education started in 1930; in two years, he entered the local Lycée Henry-IV. After World War II, he proceeded his education at the prestigious École Normale Supérieure in Paris. While at École Normale, he suffered from depression, probably because of his homosexuality. He was a member of the French Communist Party that he left due to his disagreement with the actions of Joseph Stalin in the Soviet Union. 1952 was the year when Foucault got a degree in both psychology and philosophy. He was lecturing for some time (at the École Normale and the University of Lille) but realized that this occupation was not his cup of tea. He spent the second half of the 1850s as a cultural attaché in Sweden, Poland, and Germany, until he settled for some time in France. Here he defended his doctorate dissertation on Folie et déraison: histoire de la folie à l’âge classique (“Madness and Unreason: A History of Madness in the Classical Age”), which was well-received but among the limited audience. Working at the University of Clermont-Ferrand, Foucault met Daniel Defert; the two developed sexual relationships that eventually grow into love. From 1970 until his death, he worked as the Professor of the History of Systems of Thought at Foucault the Collège de France, France's most prestigious academic body. The philosopher died of AIDS-related illness in 1984.

His most famous works include Mental Illness and Personality, The History of Sexuality, The Order of Things: An Archaeology of the Human Sciences, The Archaeology of Knowledge and many others. In these and other works, Foucault attempted to create a paradigm of contemporary knowledge, develop a question of analysis, synthesis, and systematization of human culture, analyze contemporary views on the place and role of man in the world, and give a modern interpretation of some of the most important problems of philosophy. Foucault pays considerable attention to the problem of moral issues, self-improvement techniques, and personal self-education. He also engaged in literary activities, having written Death and the Labyrinth: The World of Raymond Roussel.

Foucault is widely known in Europe, the United States, Japan, Australia, especially for his critical approach to psychiatry and medicine, the criminal system, the ideas of the development of the history of sexuality, the general theories about power and the relationship between power and knowledge, the image of "human death" (Fr. "La mort de l'homme"), the problem of subjectivity. His philosophical works are closely connected with the actual reality, one of his biggest concern, especially as a direct participant in the movement of homosexuals, were the problems of social identity and political dynamics.