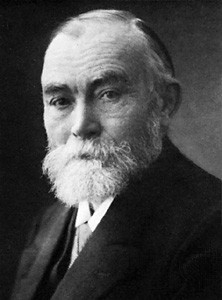 Friedrich Ludwig Gottlob Frege was a German logician, mathematician, philosopher, and representative of the school of Analytical Philosophy. Formulated the idea of logicism, that is, the direction in the foundations of mathematics and philosophy of mathematics, the main thesis is the statement about "the constitution of mathematics to logic."

Gottlob Frege was born in 1848 in Wismar (in the north of Germany). His father was a co-founder of girls’ high school and remained its principal until his death. His mother was a teacher and headmaster as well. She came from a family of Philipp Melanchthon’s descendant and a native of a noble Polish background. Frege studied at a local gymnasium, which he graduated in 1869. Here he was strongly influenced by his teacher Gustav Adolf Leo Sachse, who also was a poet. Sachse encouraged him to carry on with his studies and enter the University of Jena. In Jena, he spent two years and proceeded higher education at the University of Göttingen to study philosophy, physics, mathematics, and chemistry. Frege’s outlook was partially formed by his teachers, among which were Ernst Karl Abbe, Kuno Fischer, Rudolf Friedrich Alfred Clebsch, Wilhelm Eduard Weber. Gottlob Frege accomplished his doctorate degree in 1873 under the supervision of Ernst Christian Julius Schering. Thereafter he returned to Jena and worked as a lector until the retirement in 1918 collecting such qualifications and positions as Habilitation, Professor Extraordinarius, and Ordenlicher Honorarprofessor.

As for his personal life, Frege married Margaret Lieseburg in 1877. The couple had two children that died young and eventually adopted a son. The early death of his wife in 1905, poor health and frustration with failure to find the solution to Russell’s Paradox influenced Frege a lot, he lost his intellectual steam and produced little work in the period between 1906 and retirement in 1918. Gottlob Frege died 26 July 1925 in Bad Kleinen.

Frege’s contribution to the study of Logic many compare to the input of Aristotle, Alfred Tarski, and Kurt Gödel. His revolutionary work Begriffsschricht (Concept Script) (1879) marked the beginning of the new era in the history of Logic. In Begriffsschrift Frege reviewed from a completely new position a number of mathematical problems, including a clear interpretation of the concepts of function and variables. He essentially invented and axiomatized the logic of predicates, due to his discovery of quantifiers, the use of which gradually extended to all mathematics and allowed to solve the medieval problem of multiple community. These achievements opened the way to the theory of descriptions of Bertrand Russell and Principia Mathematica (written by Russell with Alfred Whitehead), and the famous Gödel theorem on incompleteness.

Frege introduced the distinction between meaning (Sinn) and the value (n. Bedeutung) of a notion denoted by a particular name (the so-called Frege triangle or the semantic triangle: sign-sense-meaning). Under the meaning within the framework of his system of representations understood the subject area associated with a certain name. By sense implies a certain aspect of consideration of this subject area. For example, someone can know the names of Mark Twain and Samuel Clemens, not realizing that they belong to the same object because they "represent it in different ways," which means that their meaning is different.

In addition to his work on Logic, Frege is also one of the founders of Analytic Philosophy, mainly because of his contributions to the Philosophy of Language. In fact, the challenge of developing new and interesting theories on the nature of language, functions, concepts and philosophical logic, so exercised him that he broke off his work on mathematical logic for several years.