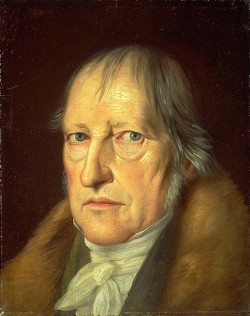 Georg Hegel was born in 1770 in Stuttgart (in southwestern Germany) in a family of Georg Ludwig, a secretary to the revenue office, and Maria Magdalena Louisa, a lawyer daughter. When Hegel was 3 years old, he went to the “German school” and two years later entered the “Latin School,” as his mother taught him Latin and in 1776 he went to Stuttgart’s gymnasium. When Hegel was 13, he and his parents caught the “bilious fever” disease; Georg and his father survived, but, unfortunately, his mother died. Since childhood he read a lot. He often visited the city library, where he read books on science and philosophy.

Hegel’s father wanted his son to join the clergy, so Georg entered Tübingen Theological Institute (theological seminary) at the University of Tubingen, where he attended a philosophical and theological course and defended his master's thesis. Here he developed close relationships with his roommates – the future philosopher Friedrich Wilhelm Joseph Schelling and the poet Friedrich Hölderlin. The trio expressed admiration to Hellenic civilization and enthusiasm for the French Revolution. After receiving a theological certificate, Hegel worked as a house tutor first to an aristocratic family in Bern and then to a family of a wine merchant in Frankfurt. During that time, Hegel wrote a text known as the Life of Jesus, an essay Fragments on Religion and Love. In 1797, The Oldest Systematic Program of German Idealism was written in Hegel’s hand, although the authorship is unknown and the document is thought to be written by either Hegel, Schelling, Hölderlin, or the unknown fourth person.

In 1801, Hegel moved to Jena to work as a lecturer (unsalaried) on Metaphysis and Logic. This was not the best time for him, as he was not popular with students. He also gave a series of joint lectures with Schelling on an "Introduction to the Idea and Limits of True Philosophy." It was 1802 when these two started a Critical Journal of Philosophy. Meanwhile, Hegel was defining his philosophy, which began with social and religious themes but eventually moved toward educational reform. He rejected Kant’s theories and developed dialectical thinking, which was laid out in The Phenomenology of Spirit.

Hegel’s financial situation was bad and became worse when the University of Jena was abandoned by the majority of students because of the Battle of Jena. In 1807, he received the post of editor in the newspaper in Bamberg, and in 1808 moved to Nuremberg to become the headmaster of the gymnasium. In 1811, Hegel married Marie Helena Susanna von Tucher that he had two children with. In this period he published his second major work, the Science of Logic (Wissenschaft der Logik; 3 vols., 1812, 1813, 1816). Between 1816 and 1818, he was teaching at the University of Heidelberg, thereafter he was appointed a chair of philosophy at the University of Berlin, a position that he held until his death of cholera epidemic in 1831.

The most famous works of Hegel are The Phenomenology of Spirit, The Science of Logic and Elements of the Philosophy of Right, but to be honest, they were written complicated and confusing since he was a horrible writer. Hegel is thought to be the last of the great philosophical-system builders of modern times, but his philosophies quickly became politicized, set in opposition to such prominent figures of individualism as Søren Kierkegaard and Arthur Schopenhauer.