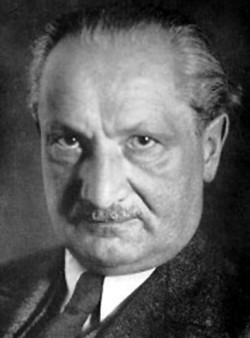 Martin Heidegger was a German philosopher who concentrated his work in the fields of phenomenology and hermeneutics. One of the founders of hermeneutics, German existentialism, and modern linguistic philosophy. Along with Ludwig Wittgenstein, he made a linguistic revolution. Heidegger is also known for poetic nature of his texts and the use of dialectal German in serious writings.

Martin Heidegger was born in 1889 in rural Meßkirch (southern Germany). His father, Friedrich, was a sexton of a local church, which helped to provide his son with education as their family was rather poor. First, Heidegger studied at Konstanz high school (on the church scholarship) and in 1906 entered a Jesuit seminary, though in a few weeks he was discharged from there due to health reasons. In 1909, Heidegger entered the University of Freiburg to study theology but later changed his field to philosophy and mathematics. He completed a doctoral thesis on psychologism in 1914 and was thereafter joined the German army but stayed there only for two months again because of health. For two years he worked as a Privatdozent (unsalaried teacher), meanwhile earning his habilitation on Duns Scotus, a medieval philosopher, in 1916.

1923 was the year when Heidegger got a position of extraordinary professor in Philosophy at the Marburg University. Among his famous students were Jacob Klein, Leo Strauss, Hans Jonas. Here he began to develop his own philosophy, connected with the sense of being. His most important work Sein and Zeit (Being and Time) came out in 1927, making Heidegger instantly famous as a prominent thinker. The publication brought him a professorship in philosophy at the University of Freiburg, and he accepted it, though the same offer from Marburg University was on the table.

For a year, he was a rector of the University and in his inaugural speech he supported the German revolution and later that year he expressed support of Adolf Hitler. Heidegger was an active and enthusiastic member of the Nazi Party and even wrote a few anti-semitic statements in Black Notebooks (published in 2014). After WWII Heidegger was banned from teaching because of his ties to the Nazi Party, but eventually he was allowed to lecture and did so from 1951 until 1958, and by invitation until 1967. Speaking of his personal life, Heidegger married Elfride Petri in 1917. The couple had two sons, one of which was Heidegger was not a biological father to. Martin Heidegger died in 1976 and was buried beside his family in Messkirch cemetery.

There are two distinguished periods in the work of Heidegger. The first period lasted from 1927 until the mid-30's. In these years besides Being and time, he wrote Kant and the problems of metaphysics (1929), On the essence of foundation (1929), What is metaphysics? (1929). The second period of creativity begins in 1935 and lasts until the end of his life. Significant works of the second period are Introduction to Metaphysics (1953), Hölderlin and the Essence of Poetry (1946), On the Way to Language (1959), Nietzsche (1961), etc.

In the first period, the philosopher tried to create a holistic system, which is a doctrine of being as the basis of human existence. In the second period, he refers to the interpretation of philosophical ideas, starting with the writings of ancient authors: Anaximander, Aristotle, Plato, and ending with outstanding cultural reagents of the New Time: F. Helderlin, F. Nietzsche, and R. M. Rilke. In this period, the problem of language becomes for him the main theme of reflection.

He saw his task as a philosopher to justify in a new way the doctrine of the essence and the meaning of being. To achieve this goal, he sought to find ways to increase the adequacy of the transfer of his thoughts by means of language. His efforts are aimed at conveying the finest shades of meaning by maximizing the use of the content of philosophical terms.

Tell me how you read and I'll tell you who you are.

Making itself intelligible is suicide for philosophy.

If I take death into my life, acknowledge it, and face it squarely, I will free myself from the anxiety of death and the pettiness of life - and only then will I be free to become myself.

Why are there beings at all, and why not rather nothing? That is the question.