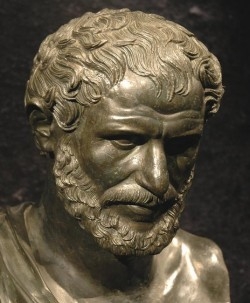 Heraclitus was a Greek philosopher, the founder of the first historical or original form of dialectics. Heraclitus was also known as the obscure or the Dark for his difficult and unclear teachings. His most famous quotations are “There is nothing permanent except change”; “No man ever steps in the same river twice, for it’s not the same river and he’s not the same man”; “Everything changes and nothing stands still” and others.

Heraclitus lived at the time of 69th Olympiad (though unconfirmed), according to the work of Diogenes Laërtius Lives and Opinions of Eminent Philosophers. His was born to a wealthy aristocratic family in the city of Ephesus (modern-day Efes, Turkey). His father’s name was either Heracon or Bloson, and Heraclitus is believed to abdicate the kingship in favor of his younger brother. Most of the sources emphasize that since young age Heraclitus made the impression of an intelligent person, that he was self-taught and the student of no one. He also probably did not have direct students, but his intellectual influence on subsequent generations of ancient thinkers is significant.

The gloomy and contradictory legends about the circumstances of the death of Heraclitus ("ordered to smear himself with manure and, lying so, died," "became the prey of dogs") are interpreted by some researchers as evidence that the philosopher was buried in Zoroastrian customs. Traces of Zoroastrian influence are also found in some fragments of Heraclitus. In his memoirs, Emperor Mark Aurelius writes that Heraclitus died of dropsy, and was covered with manure as a remedy for the disease.

The only known work of Heraclitus was On Nature (not to be confused with the work of Anaximander). It was divided into three parts; one on the universe, another on politics (and ethics), and one on theology. The presentation of thoughts in this work is obscured by stylistically mysteriousness, therefore his ideas are not quite clear, dark. However, the language of Heraclitus, unlike Anaximenes of Miletus, is simple and easy, rich in metaphors and comparisons, rather mythologized. Researchers note that Heraclitus had more mythology in his works than the Milesian philosophers.

In the teaching of Heraclitus, the basis of science is logos. It was him that for the first time introduced this concept into the philosophical terminology this concept, and by “logos” he means the general law of being, the basis of the world. Heraclitus asserts: everything is done by the logos, which is eternal, universal and necessary; the highest goal of knowledge is the knowledge of the logos, and at the same time the knowledge of the highest unity of the universe and the attainment of higher wisdom, for a sign of wisdom is the ability to agree with the statement of the logos that everything is united. At the same time, Heraclitus indicates that knowledge of logos and wisdom is not given to everyone, although all people are intelligent by nature.

For Heraclitus, the cause and the beginning of the world was the fire that exists everywhere and in everything, constantly changing. From time to time, there is a "world fire," after which space is completely destroyed, but only in order to reborn again.