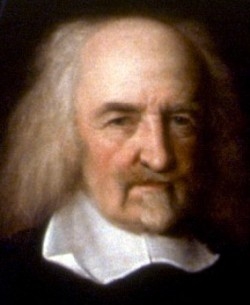 Thomas Hobbes was an English philosopher, materialist, one of the founders of the theory of social contract. The main interests of Hobbes were political philosophy, history, ethics, and geometry. He was a classical representative of English philosophy during the English Revolution, he consistently developed a system of rational philosophy, which covers not only the doctrine of being, knowledge but also the doctrine of society, the state.

Thomas Hobbes was born in 1588 at Westport (now part of Malmesbury, England). There is little information about his childhood. His father, Thomas Sr., was a vicar and after a fight with the local clergy, he was forced to leave London and family. His older brother Francis, who was a wealthy merchant, took care of the Hobbes family. At the age of four, Thomas Hobbes started his education at Westport church and later was enrolled to the Malmesbury School. He also studied at a private school of an Oxford graduate before entering Magdalen Hall, Oxford, in 1603. In 1608, Hobbes graduated from university and became the mentor of William, the eldest son of William Cavendish, Baron Gardwick, and subsequently the first Count of Devonshire. Until the end of his life, he maintained a close connection with his disciple, who became his patron. Thanks to him, Hobbes met with Ben Johnson, Francis Bacon, and other outstanding figures. In the early 1620s, he collaborated with F. Bacon, which had great significance for Hobbes. After the death of Cavendish in 1628, Hobbes receives the seat of the mentor of Sir Jervais Clifton and then educates the son of his old patron, Cavendish, with whom he traveled to Italy, where he met Galileo Galilei in 1636.

In 1640, the revolution in England actually began, and Hobbes, along with many royalists, immigrated to Paris, where he stayed until 1651. It was in Paris that the plan of his philosophical system was finally ripe. When the revolution in England came to Cromwell's dictatorship, Thomas left the Royalist Party and returned to London. Already in London in 1651, he published in English his most extensive work, Leviathan, or the Matter, Forme, and Power of a Common-Wealth, Ecclesiasticall and Civil. The work concerns the structure of society and legitimate government and is regarded as one of the earliest and most influential examples of social contract theory. Leviathan had an immediate impact, making Hobbes one of the most lauded thinkers of that time.

However, he was forced to flee the royalists back to England to appeal for protection of English government, since the book angered Anglicans and French Catholics. From the age of 60, Hobbes began to suffer “shaking palsy,” which was probably Parkinson’s disease. Meanwhile, he published a few controversial works on mathematics and physics and wrote some philosophical works, including Benemoth (published in 1682). Thomas Hobbes died of a paralytic stroke in 1679 in Derbyshire, England.

General philosophical views of Hobbes were quite controversial. Being suspected of atheistic sympathies, he published little, especially in England. The collection of works by Hobbes was published in Amsterdam only in 1688, nine years after his death. Thomas Hobbes managed to create a system of mechanical materialism that correlates with the corresponding nature and requirements of contemporary natural science.

He conducted controversy with René Descartes, concerning the existence of a special thinking substance. Geometry, as well as mechanics, Hobbes considered as ideal examples of scientific thinking. Hobbes is considered one of the most prominent representatives of social physics. He also developed ethics. His ethics derives from the sensual nature of man. As the basis of morality he took the natural law, as a desire for self-preservation and satisfaction of needs.