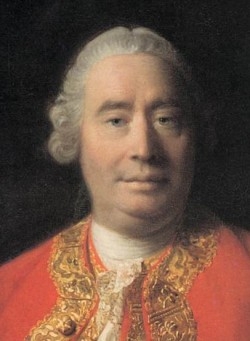 David Hume was a Scottish philosopher, empiricist, historian and economist, and an eminent figure in the British Empiricism, first known for his works in the field of epistemology.

David Hume was born in 1711 in Edinburgh, Scotland. His father, Joseph Home of Ninewells, was an advocate, and his mother, Katherine, was the daughter of Sir David Falconer. In 1723, Hume was enrolled to the Edinburgh University, where he received the foundations of legal education, as well as knowledge of the ancient Greek language. In 1734, he moved to Bristol, where he tried to serve as a clerk in a trading house, but in a few months, he realized that he this occupation is just not for him. Having failed in the commercial field, he moved to France (Paris and Reims), where he stayed for three years. He spent a significant part of his time (2 years) at La Fleche School.

After returning to his homeland, Hume began philosophical activity: in 1738, the first two parts of the Treatise on Human Nature were published. Hume's work did not cause the expected intense discussion in the intellectual environment. On the contrary, the work was actually ignored. From 1741 to 1742, Hume published his book, Essays Moral and Political, devoted to political and economic issues. It was this work that brought the author fame and popularity. In 1745, Hume accepted the offer of the young Marquis of Annandale to live with him as a mentor and tutor. From 1746, Hume served for three years as Secretary to a distant relative, Lieutenant-General St. Clair, with whom he went to a military expedition against French Canada.

In the 1750s, Hume was writing a history of England. With this work, he awoke hatred among the British, Scots, Irish, church and many others. However, after the release of the second volume of History of England in 1756, public opinion changed dramatically, and when the next volumes appeared, the publication found a significant audience not only in England but also on the continent. Meanwhile, he was working as a librarian at the Faculty of Advocates. He couldn’t make a fortune there, but the access to a library enabled him to do different research. From 1763 to 1765, Hume was Secretary to Lord Hertford in Paris, where he was admired by Voltaire and was friends (briefly) with Jean-Jacques Rousseau. For a 1year from 1767, he held the appointment of Under Secretary of State for the Northern Department in London, before retiring back to Edinburgh in 1768. David Hobbes died of cancer in 1776.

The main philosophical ideas of Hume are materialistic. Hume believes that human experience consists of perception, and perception, in turn, is divided into impressions (feelings and emotions) and ideas (references and imaginations). After perception, the one who learns begins to work on this imagination. Hume is considered one of the well-known Scottish philosophers, who was the representative of two philosophical schools - empiricism and agnosticism. He is one of the leaders in the Scottish Enlightenment. Hume put the doctrine of man in the center of philosophizing. Hume relates to the empirical tradition of European philosophy of the New Age. This means that for him the logical work of reason is meaningless without the foundation of experience in the broadest sense of the concept. About Hume it can be said that he opened psychology before it became an independent science.