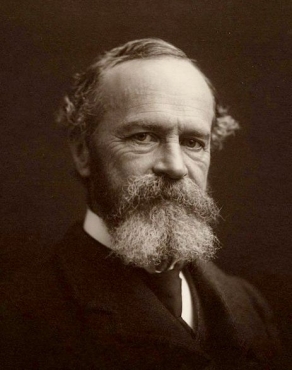 William James was an American philosopher and psychologist, one of the founders and a leading representative of pragmatism and functionalism in the USA. He is also regarded as the father of modern psychology. His work The Varieties of Religious Experience: A Study in Human Nature (1902) was ranked 89th of 100 Top Books of all times of the Newsweek magazine.

William James was born in 1842 in New York City into a wealthy and intellectual family of Henry James Sr., a Swedenborgian theologian. His younger brother, Henry James, was a famous novelist. His education started in the household, which encouraged cosmopolitanism. Later William entered the studio of William Morris Hunt, but he eventually switched to scientific studies at the Lawrence Scientific School of Harvard in 1861. His early adulthood was filled with many physical ailments, and he was diagnosed with neurasthenia.

In 1864, William James was enrolled to Harvard Medical School. The studies interrupted two times because of a scientific expedition in 1865 and illness in 1687. He finally earned M.D. degree in 1869, although he never actually practiced medicine. Since 1872 James was an assistant professor in physiology and psychology, since 1885 he was appointed a full professor of philosophy, and in 1889-1907 he worked as Professor of Psychology at Harvard University, where in 1892 he organized the first US Laboratory of Applied Psychology (together with Münsterberg). Actively engaged in parapsychological experiments and spiritualism. Along with Stanley Hall, James is the only psychologist who twice became President of the American Psychological Association (in 1894 and 1904).

William James wrote voluminously throughout his life. A non-exhaustive bibliography of his writings, compiled by John McDermott, is 47 pages long. From 1878 to 1890 James wrote his Principles of Psychology, in which he rejected the atomism of German psychology and proposed the task of studying concrete facts and states of consciousness and not data that are "in" consciousness. In 1884, a wide recognition earned James's theory of emotions, which was based on the fact that emotions are the consequence of human awareness of reflex physiological changes in the body. James was the founder of the pragmatic theory of truth, in which the main criterion of truth is practice. He defined as the true ones those convictions of the person that are useful to her.

In 1892, another book of William James named Psychology: The Briefer Course was published. In this work, he criticized both the English associationist school and the Hegelianism of his day as competing dogmatisms of little explanatory value. James became the author of many fundamental scientific works on psychology and philosophy. He expressed his views on religion in the book The Varieties of Religious Experience. He considered genius people to be a gift. According to him, they are born as a reaction to historical events and they are the main driving force of history. Among his most famous works, one should also note Pragmatism (1907), Talks to Teachers on Psychology: and to Students on Some of Life's Ideals (1899), The Will to Believe, and Other Essays in Popular Philosophy (1897) and many others. William James died of heart failure in 1910.