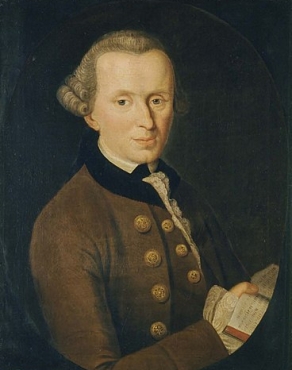 Immanuel Kant was a German philosopher, the founder of the German classical philosophy. He is considered the starting point for the German Idealism and one of the most important thinkers of the Age of Enlightenment and modern Europe in general. His most famous work is the Critique of Pure Reason.

Immanuel Kant was born in 1724 in Königsberg, Prussia (modern-day Kaliningrad, Russia) and he spent there his entire life. Kant was born in the family of harness maker, and he later spoke very highly of his parents, who gave him the best education they could afford. His education started at Saint George’s Hospital School, then he went to Collegium Fridericianum, which he graduated in 1740. The same year he was enrolled at the theological faculty of the University of Königsberg, where he studied philosophy under Martin Knutzen. In 1746, he left his studied because of father’s death and thereafter worked as a private tutor for about a decade. Kant published his first philosophical work Thoughts on the True Estimation of Living Forces in 1749.

1755 was the year when Immanuel Kant returned to the University of Königsberg with the aim to continue education and receive a doctorate of philosophy. The following 15 years he spent working as a tutor and lecturer and wrote major works. Only in 1770, Kant was appointed Full Professor of Logic and Metaphysics. Since 1786, Kant held the post of rector of the university, and in 1788 he was re-elected for a second term. Immanuel Kant died in 1804.

The philosophy of Kant is divided into two periods – pre-critical (until the early 70's of the XVIII century) and critical when Kant began to investigate the limitations of the mind. In the pre-critical period, Kant acted as an influential scientist, theorist, and naturalist. During this period, he recognized the possibility of the objective existence of things beyond the consciousness of man. He published his outstanding work "The General Natural History and Theory of the Heavens" (1755), in which he substantiated the hypothesis about the natural origin of the solar system. He made an important discovery about the gravitational interaction of the Moon and Earth, which affects the speed of their rotation, the slowdown of the Earth's rotation due to friction caused by tides. All these Kant's ideas have become the basis for a new look at the world as a mobile, changing, contradictory one. It played an important role in the formation of dialectics. Thus, in the pre-critical period, the teachings of Kant were inherent elements of materialism and dialectics.

The most important ideas of Kant's philosophy were developed during the critical period (the name is associated with the first word in the title of the three major works of this period, "critique": the study of the foundations). At the forefront of this period is the idea of a so-called "Copernican revolution" in philosophy. During this period, he began to deny the knowledge of things, their essence. In this period, Kant publishes a number of works, such as Critique of Pure Reason (1781), Critique of Practical Reason (1788), and Critique of Judgments (1790).

The main idea of these works is the "critique" of the theory of cognition, the thesis that a person must first establish the limits of his cognitive possibilities before finding out the essence of things. The main feature of Kant's philosophy is its duality, the combination of opposing philosophical trends in one system. The main contradiction of the philosophical doctrine of Kant is the discrepancy between the recognition of the existence of things, the phenomena of nature outside the consciousness of man and the negation of their knowledge.

Happiness is not an ideal of reason, but of imagination.

Religion is too important a matter to its devotees to be a subject of ridicule. If they indulge in absurdities, they are to be pitied rather than ridiculed.

He who is cruel to animals becomes hard also in his dealings with men. We can judge the heart of a man by his treatment of animals.

Look closely. The beautiful may be small.

I had to deny knowledge in order to make room for faith.