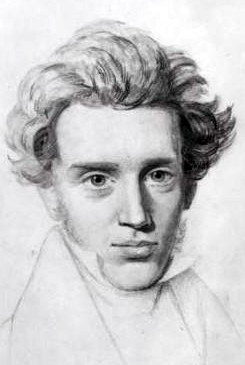 Søren Aabye Kierkegaard was a Danish philosopher and theologian, the founder of existentialism. He wrote on topics of organized religion, Christianity, morals, ethics, psychology and philosophy of religion in a language full of metaphors, irony and hyperbole. He did not want to be famous so mostly wrote under pseudonyms. His writings brought attention only in 20th century, after being translated.

Søren Kierkegaard was born in 1813 in Copenhagen, Denmark. The education of young Søren was under the control of his father, a wealthy hosier, and only at the age of six, the boy went to School of Civic Virtue. In the autumn of 1830, at the will of the father, Kierkegaard became a student at the Theological Faculty of the University of Copenhagen. He was enrolled, like all students, to the Royal Guard, but he was dismissed for already in three days for reasons of health. His father died in 1838 and left the son inheritance, which covered the expenses of education, his subsequent living and publications. Søren received his master's degree in 1841, defending his dissertation On the Concept of Irony with Continual Reference to Socrates, devoted to the concepts of irony in the works of ancient Greek writers. He was engaged with Regina Olsen, but the engagement broke off in a year.

In 1843, the most significant work of Kierkegaard Either/Or was published. That was a two-volume ethical and aesthetic work on 838 pages. Over the next twelve years (until his death), he published more than six thousand printed pages, and his manuscript legacy is almost ten thousand pages. Kierkegaard’s another important writing was Fear and Trembling (1843), where the author's focus is on faith in God and its power in modern conditions. The last year of Kierkegaard's life is the year of his rebellion, revolt against clericalism and all that is associated with it: the religious hypocrisy and the formal rituals of the Protestant church. Søren Kierkegaard died at the age of 42 in 1855.

Kierkegaard stressed that a human is the only subject worthy of attention of philosophy. He thought that it is impossible to know a person by means of science, since each person is unique, and science learns through generalization or putting phenomena under general laws. Man can comprehend himself only through inner experience and self-immolation. He wrote that there were two ways of life, the "aesthetic" (based on temporal, sensory pleasures, whether intellectual or physical) and the "ethical" (based on moral codes and the infinite or the eternal).

Kierkegaard was the first one to use the term "existential" to denote such features of human existence as non-obedience and an exit for all and every possible limits. The word "existentia" is translated from Latin as "existence", but in its original meaning it indicates what is out of the reach of the established. Kierkegaard applied this word exclusively to man, to refer to the very first features of the human mode of being, and therefore became the ideological predecessor of existentialism - the influential philosophical trend of the 20th century.