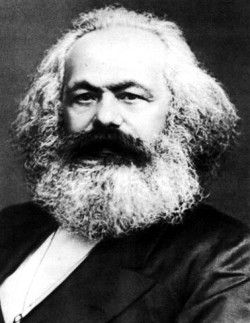 Karl Marx was a German philosopher, sociologist, political scientist, economist, journalist, the protagonist of the workers' socialist movement and one of the founders of the First International (The International Workingmen's Association). His scholarly and political studies are combined into a theoretical social science doctrine, which in his name was called Marxism and became the foundation of the socialist and, later, communist movement in Europe and the world.

Karl Heinrich Marx was born in 1818 in Trier, Prussia (modern-day Germany). His formal education started at the Trier Gymnasium. In 1836, Marx became engaged with Jenny von Westphalen. After graduating from the school, he studied at Bonn University, and then at the University of Berlin, where he studied jurisprudence but was later enthralled by history and philosophy. In 1841, Karl Marx earned a doctorate with a thesis The Difference Between the Democritean and Epicurean Philosophy of Nature. In 1842-1843, he worked in the newspaper “Rheinische Zeitung,” where, as a journalist and editor, he did not hesitate to criticize the government. In 1843, Marx married the Jenny von Westphalen, the niece of the founder of the Philips concern. The newly created family moved to Paris, where Marx met Henry Heine and in 1844, began a friendship with Friedrich Engels, with whom he worked until the end of his life. It was Engels who drew Marx's attention to the position of the working class. Marx and Engels' published their most famous work, "The Communist Manifesto" in early 1848, as the manifesto of the Communist League, a small group of European communists who had come to be influenced by them.

When the February Revolution of 1848 broke out, Marx was banished from Belgium. He came back to Paris, and thence, after the March Revolution, to Cologne, Germany, where he tried to re-publish the "Rheinische Zeitung." Since August 1849, his biography has been linked to London: he remained in this city until his death. Emigration was an extremely difficult time, the family was deprived, living only on occasional fees from newspaper articles, and only Engel's constant material support helped make ends meet. In the 1850's, Marx began systematic work on his own economic theory, spent a lot of time in the library of the British Museum, studying a wide variety of scientific disciplines. Throughout 1863-1865 Marx wrote work, which in 1867 will be released as the first volume of the famous Capital. The second and third volumes, over which Marx worked until the end of his life, were published by Engels after the death of his comrade, in 1885 and 1894. Karl Marx died in 1883 in London.

Marx, together with Friedrich Engels, created a holistic and consistent materialistic system of views on the world, human history and the development of society. This system was called Marxism and became an ideology of the Marxist movement. Marx's Capital is one of his most important works. The economic theory of Marx, described in this paper, used the theory of A. Smith, D. Ricardo. Marx considered the question of additional value, investigated the relationship of labor and value, goods, and money. Marx's economic doctrine allowed us to solve several problems in Ricardo's theory. Unlike the idealistic dialectic of Hegel, Marxist dialectics is materialistic. By Marx, not consciousness or God create matter, but on the contrary, matter in its constant movement and development has created consciousness. Cognition is possible through the senses and minds, and practice is a measure that measures the world and is the only criterion of truth. Marx's dialectical method also applies to history, formulating a materialistic view of history. Not a spiritual process, but material conditions are decisive in the development of society.