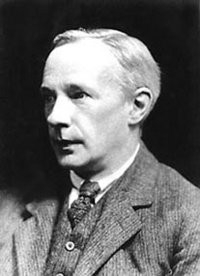 George Edward Moore was an English philosopher and the founder of the analytic tradition in philosophy (together with Ludwig Wittgenstein and Bertrand Russell. He is remembered as an advocate of common sense concepts, he made a contribution to epistemology, metaphysics, and ethics.

George Edward Moore was born in 1873 in London in the family of aristocrat Edward Moore. He was raised in the gospel spirit. He graduated from the classical department of Dulwich College, where he discovered abilities and interest in languages. By the end of the school, he was an absolute agnostic (according to him). From 1892, he studied classics and moral sciences at Trinity College Cambridge. In 1893, he met B. Russell, on whose advice he began to study philosophy. In 1898 Moore became a Fellow of Trinity, a post that he held until 1904. His most important works published at that time were The Nature of Judgment (1899), Refutation of Idealism (1903) and Principia Ethica (1903). He was a member of the Aristotelian Society and its president from 1918. In 1904-11, live in Edinburgh and Richmond. With sufficient material resources, Moore continued to engage in philosophy; In Edinburgh, he studied Russell's Principles of Mathematics, wrote several articles, including Nature and Reality of Objects of Perception (1905-06), in Richmond, worked on Ethics (1912). He was elected a fellow of the British Academy in 1918. He was a member of the Cambridge Apostles, the secret intellectual society, from 1894 to 1901, and the Cambridge University Moral Sciences Club.

In 1910-11, he read a series of lectures on metaphysics at Morley College (London), which were published in 1953 in the book Some Main Problems of Philosophy. Subsequently, Moore taught philosophy (psychology, then metaphysics) at Cambridge (1911-39, 1925 - professor), lectured at Oxford University (1939) and US universities (1940-44). He had great influence as a lecturer and teacher. Moore described his teaching career in detailed memoirs in the Autobiography, which he wrote for a volume published in the series The Library of Living Philosophers (1942). He was the Chief Editor of the Mind Magazine (1921-47). His writings were published in «Mind,» «Proceedings of the Aristotelian Society,» and «Aristotelian Society, Supplementary.» George Edward Moore died in 1958 in Cambridge, England.

The main merit of Moore is that he drew attention to analyzing the meaning of the words and statements used by the philosophers, seeing in this the key to the solution (more precisely, to clarify) of many problems. In the spirit of neorealism, Moore spoke of the existence of concepts independent of consciousness. The concept is comprehended intuitively and enters an attitude of thought. Judgment is constructed from concepts. As to the judgments of existence, Moore adhered to the point of view that their difference from other judgments is only in the concept of existence. The fact has the form of judgment, so the reference to the fact has no evidential value. The existence of the world is the existence of concepts - so briefly we can summarize the ontology of Moore. In ethics, he was into intuitionism. In the fundamental work Principia Ethica ("The Foundations of Ethics," "Principles of Ethics" - the Latin name reflects the tradition of creating "non-medieval" titles), defended the concept of autonomous ethics, which cannot be justified by any other reality, including religion. This work is one of the largest writings, devoted to the problems of metaethics.