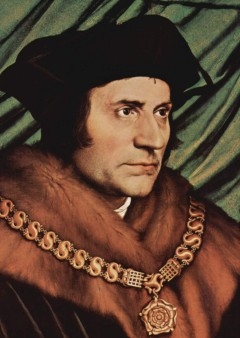 Thomas More was an English writer, philosopher, statesman, Lord Chancellor (1529-1532). He is the author of the social and political treatise Utopia and one of the founders of utopian socialism. Pope Pius XI canonized More in 1935 as a martyr. Pope John Paul II in 2000 declared him the "heavenly Patron of Statesmen and Politicians. However, Thomas More entered the national and world history, first of all, as a humanist, thinker, and outstanding writer.

Thomas More (also Saint Thomas More) was born in 1478 In London, England. His father was a well-known lawyer, famous for his incorruptibility. More received his primary education at St Anthony's School. At the age of 13, he was sent to the house of the Archbishop of Canterbury as a household page. In 1492-94, he studied at Oxford and then continued his education at the law school of London. Meanwhile, More studied classical languages, works of ancient authors, met Oxford humanists, in particular, Erasmus of Rotterdam, who dedicated the famous In Praise of Folly to More. Most likely, Thomas More was not interested in the career of a lawyer. While studying law, he decided to settle near the monastery and take monastic tonsure. However, he served his country differently, although up to his death he led a very restrained way of life, kept fasts, constantly prayed.

Approximately in 1502, More began to work as a lawyer and teach law, and in 1504 he was elected to parliament. Although, he fell into disgrace of Henry VII and had to withdraw himself from public activities. More returned to politics in 1509, when Henry VII died. In 1510, More was again elected to parliament and appointed to the position of junior sheriff of the capital, assistant to the city judge of the capital. In 1515, he began work on his first book. Published in 1516, Utopia was highly regarded by the monarch. In this work, the modern European society is opposed to an ideal society, without private ownership. Although, it was not More's first literary experience: in 1510 he translated into English the biography of the scholar Pico della Mirandola. Meanwhile, More worked on the History of King Richard III but did not finish it, which did not prevent it from being considered one of the best works of national literature of the Renaissance. After the publication of Utopia, his career of a statesman went up with even faster pace. In 1518, More he became one of the members of the secret royal council and a member of the highest judicial institution in 1521. More was knighted and made under-treasurer of the Exchequer in 1521. During 1525-27 More was Chancellor of the Duchy of Lancaster, and Lord Chancellor from 1529. His appointment was unparalleled since More did not belong to the higher circles by origin.

In 1532, More resigned on the officially announced cause of poor health, but in reality his withdrawal was caused by a disagreement with Henry VIII's position with regard to the Catholic Church (the creation of the Anglican Church). In 1534 he was placed in the Tower, and on July 6, 1535, he was executed in London.