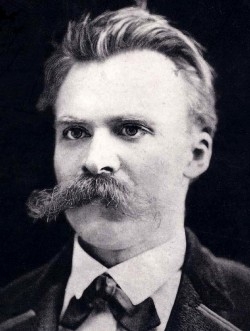 Frederich Nietzsche was born in 1844 in Röcken (not far from Leipzig, Saxony province in the city of Prussia) in the family of the Lutheran pastor Carl Ludwig Nietzsche. In 1854, he entered Domgymnasium in Naumburg. After the death of his father, he was raised by his mother. In 1858, he went to study at the famous gymnasium Pforta. There he studied the ancient texts, carried out the first attempts at writing, experienced a strong desire to become a musician, was keenly interested in philosophical and ethical issues, read with pleasure Schiller, Byron and especially Holderlain, and also first heard Wagner's music.

In 1862, he went to the University of Bonn, where he began to study theology and philology. He quickly got disappointed in student life, and after trying to influence his comrades, he turned out to be incomprehensible and rejected. This was one of the reasons for his rapid transfer to Leipzig University, following his mentor Professor Friedrich Ritschl. However, in the new place philology training did not bring Nietzsche satisfaction, even despite his brilliant success in it: at the age of 24, being still a student, he got the post of professor of classical philology at the University of Basel, which was an unprecedented case in the history of European universities.

Nietzsche was unable to take part in the Franco-Prussian War of 1870; at the beginning of his professorial career, he demonstrably renounced Prussian citizenship, and the authorities of Switzerland prevented him from directly participating in battles, allowing only the service of a medical orderly. Accompanying the wounded wagon, he became infected with dysentery and diphtheria. Nietzsche never had a good health. Already from 18 years old, he began to experience strong headaches, severe insomnia, and by 30 years, he had a sharp deterioration in his health. He was almost blind; he had unbearable headaches and insomnia he treated with opiates, as well as problems with the stomach. On May 2, 1879, he left teaching at the university, receiving a pension with an annual amount of 3000 francs. The painful condition did not become an obstacle to writing Nietzsche's main philosophical works that glorified his name. The first book by Nietzsche, The Birth of the Tragedy, was published in 1872. It was written under the influence of composer Richard Wagner, who was his close friend, as well as the philosophy of Schopenhauer and Schiller.

In 1883 two parts of the book Thus Spoke Zarathustra were published; the third part saw the light in 1884. This book was an attempt by Nietzsche to gather together the main conclusions drawn up by this time. The output of the first three parts remained almost unnoticed, so the fourth part was published in a very modest circulation, Nietzsche even decided not to continue working on this book anymore. Only in 1891, the fourth part was published in a fairly large circulation, and soon Thus Spoke Zarathustra gained enormous popularity in Germany, it was translated into many languages ​​and began to be considered the classics of world literature.

In January 1889, Nietzsche was in Turin, when he had a breakdown right on the street. He was treated in a psychiatric clinic, and then transferred to his relatives. Friedrich Wilhelm Nietzsche died in 1900 in Weimar.

Friedrich Nietzsche's ideas and thoughts had a noticeable influence on the formation of the latest philosophical trends - existentialism and postmodernism. His name is associated with the birth of the theory of negation - nihilism. He was the founder of a course, which was later called Nietzscheism, which spread at the beginning of the 20th century. Nietzsche wrote on all the most important questions of society's life, but above all about religion, psychology, sociology, morality. In contrast to Kant, Nietzsche not only criticized the pure mind, but went further - he questioned all the obvious achievements of the human mind, tried to create his own system for assessing human condition. He created the idea of “superhuman” (Übermensch), a concept formulated as a goal to which a person must strive in his development.