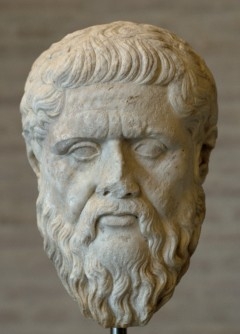 Plato was an ancient Greek philosopher, founder of a philosophical school known as the Academy in Athens, the first institution of higher learning in the Western world. His teachings are the first classical form of objective idealism. Plato is the first philosopher, whose works were preserved not in short passages quoted by others, but completely.

Plato’s early life is rather vague, but most of the scholars agree that he was born in Athens or Aegina between 429 and 423 BC. Plato was a descendant of the family of aristocrats who took direct part in the political life of the city-state. According to Diogenes Laërtius, the philosopher was named Aristocles after his grandfather. His education was typical of the time. One of Plato's first mentors was Cratylus, a sophist who was close in his views to Heraclitus. Around 408 BC there was a momentous event that determined the whole further biography of Plato and his worldview, which was an acquaintance with Socrates. Under his influence, Plato stopped dreaming about a career of a politician, and, as the legends say, he burned the tetralogy he wrote in honor of the holidays. Socrates became a mentor for Plato and "settled" in all his works, which, for the most part, were written in the form of a dialogue between characters, mostly historical ones. After the death of Socrates in 399 BC, Plato went to Megara with several friends, where he took part in the Corinthian War. It is known that in 387 BC he visited southern Italy and Sicily, communicated with representatives of the school of Pythagoras.

In 387 BC, Plato returned to Athens, where he founded his own school. During this period he came a few times to Syracuse, where he actively participated in local political life. There he met Dion, who was close associate of Dionysius I, ruler of Syracuse. The second time, Plato arrived there in 367 BC after the death of the ruler. His goal was to influence Dionysius II so that he would become an example of his idea of ​​an ideal state ruler, a philosopher on the throne. Being first received hospitably, Plato soon turned out to be in exile. His last trip to Sicily was in 361 BC at the request of the Dion and the Pythagoreans. However, the exhortations of the philosopher were not heard, and he was forcibly kept on the island, and only the help of influential persons helped to return safely to his homeland. There he ran his school until his death in 347 or 348 BC.

It is believed that all the works of Plato have survived to this day, in the form of an edition, the merit of the creation of which belongs to Hermippus, a third-century Alexandrian. It consists of 36 works, which are divided into 9 tetralogies, reflecting the evolutionary path of philosophy. His works, the famous Platonic dialogues, are usually grouped into Early (sometimes Transitional), Middle and Late period. The idea of ​​good was the highest idea of ​​his teaching. He developed dialectics and outlined the main stages of human existence. His most known work is Republic, where the philosopher shares his understanding of the ideal social order, which is a hierarchy of the ruler and sages, officials and soldiers and the third estate - artisans and peasants.