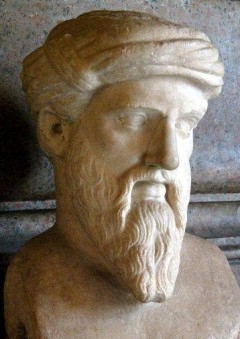 Pythagoras was an Ancient Greek philosopher, mathematician, religious and political figure, founder of Pythagoreanism, which became a legend and source of discussions in ancient times. In 306 BC, a monument at the Roman Forum was put in his honor as the most intelligent of the Greeks.

Pythagoras was born in 570 BC in the island of Samos. His father was a carver of precious stones. According to ancient sources, Pythagoras from birth was distinguished by amazing beauty; when he became an adult, wore a long beard and a diadem made of gold. His giftedness also manifested at an early age. He received good education, the young man was trained by many mentors, among whom were Pherecydes of Syros and Hermodamas of Samos. The next place where Pythagoras educated was Miletus, where he got acquainted with Thales, a scientist who advised him to go to Egypt. Pythagoras had a letter of recommendation from the pharaoh himself, but the priests shared secrets with him only after successfully passing difficult trials.

Among the sciences, which he mastered well in Egypt, was mathematics. The next 12 years he lived in Babylon. According to the legends, Pythagoras visited India. He returned home about 530 BC. The status of a semi-court under the tyrant Polycrates did not seem attractive to him, and he lived in caves for a time, after which he moved to Proton. Perhaps the reason for his departure was in philosophical views. Pythagoras was an idealist, an adherent of the slave aristocracy but in his native Ionia, democratic views were very popular and their adherents had considerable influence.

In Croton, Pythagoras organized the school that was both a political structure and a religious monastic order with its own charter and very strict rules. In particular, all the members of the Pythagorean union should not have eaten meat, disclose the teachings of their mentor to others and they refused to have personal property. Towards the end of his life, Pythagoras fled to Metapontum (further north in the Gulf of Tarentum) because of a plot against him and his followers by a noble of Croton named Cylon. He died in Metapontum from unknown causes sometime between 500 and 490 B.C., between 80 and 90 years old.

Since Pythagoras considered his teaching a secret and practiced only an oral transmission to his disciples, there were no collected works after him. Still some information became obvious, but it is incredibly difficult to distinguish truth and fiction. A number of historians doubt that the famous theorem of Pythagoras was proved by him, arguing that it was known to other ancient people. The name of Pythagoras has always been surrounded by many legends even during life. It was believed that he could control spirits, knew how to prophesy, and knew the language of animals, communicated with them, birds under the influence of his speeches could change the vector of flight.

In addition to the proof of Pythagoras' theorem, this mathematician is credited with a detailed study of integers, proportions, and their properties. Pythagoras was one of the first who was convinced that the Earth is a sphere and the center of the Universe, that the planets, the Moon, the Sun move in a special way, not like stars. To a certain extent, the ideas of the Pythagoreans about the movement of the Earth became the forerunner of the heliocentric doctrine of N. Copernicus.