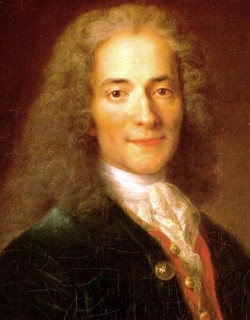 Voltaire was a French Enlightenment writer, historian, and philosopher famous for his wit, his attacks on the established Catholic Church and Christianity as a whole, and his advocacy of freedom of religion, freedom of speech and separation of church and state.

François-Marie Arouet, known as Voltaire, was born in 1694 in Paris in a family of a notary. In 1704, he began to study at Jesuit Collège Louis-le-Grand, which he finished in 1711. The boy was excellent at studies but he almost got expelled because of the fascination with free thought and voiced doubts in Christian postulates. At the end of the college, François-Marie got into lawyer’s office but his literary career seemed more attractive to him. In May 1717, he was imprisoned in the Bastille for writing a satire on the French Regent but a year in jail did not cool his literary fervor. Already in 1718, his first significant play, Oedipe, was staged and greatly received by the public. It glorified the 24-year-old author and his creative pseudonym; from 1718 he became known as Voltaire.

Because of the conflict at the end of 1725 with a well-known nobleman whom Voltaire had imprudently ridiculed, he was imprisoned again. He was released from prison on the condition that he would go abroad. Thus in the spring of 1726, Voltaire moved to England, where he was received as a prominent figure in literature, and he, in turn, paid much attention to the study of the social structure of the country, its historical, philosophical, cultural heritage.

After his stay in England, from where he returned after three years, in 1733 he released Letters Concerning the English Nation, which carried out very bold and not flattering parallels with France. The book was sentenced to burning, and the disgraced author managed to escape from the arrest by taking refuge. He fled to the estate of his mistress, Marquis de Chatelet. In 1736, he began a long-lasting correspondence with the Crown Prince of Prussia, which raised the prestige of both future ruler and Voltaire. In 1740, the prince became King Frederick II, and the French authorities took advantage of his close relations with Voltaire, asking the writer to clarify some points of the foreign policy of the new monarch regarding their country. Voltaire successfully fulfilled the mission entrusted to him, which increased his authority, gradually growing not only at home but throughout the continent.

In 1744, a short and unsuccessful career of Voltaire in the court began. Literary popularity and influential deputies provided him with a place of court historian (1745). In 1746, he was elected to the French Academy, but he never managed (despite all the efforts) to gain the king's favor. In the summer of 1750, Voltaire arrived in Potsdam, accepting the invitation of Frederick II. Causing the dissatisfaction of the king with dishonorable money speculation, as well as a quarrel with the president of the Berlin Academy of Science, Voltaire was forced to move to Switzerland, where he lived for the rest of his life and acquired several estates. In 1778, Voltaire returned to Paris, where he was received with enthusiasm. The staging of his latest play, Irene, became his apotheosis. He soon became ill and died on 30 Mas 1778.

Voltaire was a versatile writer, creating works in almost every literary form: plays, poems, novels, essays, historical and scientific works. He wrote over 20,000 letters and more than 2000 books and brochures. François-Marie Arouet was an active advocate of civil liberties, despite the risk, it set him within the boundaries of strict censorship laws of that time. The lyric of young Voltaire is filled with epicurean motives, it contains critique against absolutism.

As a supporter of Locke's sensualism, whose teachings he promoted in his Letters, Voltaire was, at the same time, the enemy of French materialist philosophy. Concerning the question of the spirit, Voltaire varied between the denial and assertion of the immortality of the soul. Voltaire played a significant role in the development of world philosophical thought, and in the ideological preparation of the French Revolution of the late 18th century.