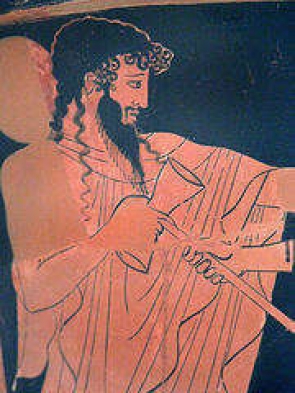 Aegisthus in the Greek myth-making is a favorite hero of ancient tragedies and dramas, known for his tragic fate, as a representative of the Pelopidas, over which the tribal curse gravitates. He is the son of Fiesta and his own daughter Pelopia, who married Atreus later. Aegisthus, according to the order of the oracle, was removed from the royal house, raised from the shepherds and nurtured by a goat.

When Aegisthus grew up, Fiesta fell into the power of Atreus and the latter entrusted Aegisthus, considering him to be his son, to kill Fiesta, who was in prison. Fiest opened to his daughter and his son-grandson Aegisf the secret of incest, after which Pelopia pierced herself with a sword, and Aegisthus killed Atreus and took possession of the royal throne.

Sons of Atreya, Agamemnon, and Menelaus, expelled Aegisthus from Mycenae after the death of the Fiestas. According to the legend, Aegisthus, while Agamemnon was at the head of the Greek army at Troy, seduced his wife Clytemnestra, who then, along with Aegisf, treacherously killed her husband on his return home. After the death of Agamemnon, Aegisthus reigned in Mycenae for seven years, blasting his wealth until Orestes avenged his father, killing his mother and her seducer.

Aegisthus in the Essays