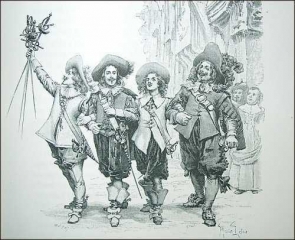 He represents the values of the old aristocracy and thus has a dated attitude. In order to increase this character’s grandeur, Dumas associates him with significant ancestors. Athos is the most modern musketeer in Dumas’ story as he embodies, for d’Artagnan, a role model, a father figure. Like all the other musketeers, he does not only have good features of character. His tenderness for gambling and alcohol show the vision that Dumas has of the society around him: the great values of nobility are gradually being lost.

Among the musketeers, Athos is the eldest, the wisest character. As Athos’ prototype Dumas used the image of the twenty-eight-year-old musketeer, whose life was cut short in the line of duty. His name was Armand de Silleg d'Atos d'Oteviel. Athos is described as melancholy, mysterious and thoughtful man. His biography is known only by de Treville. The royal musketeer skillfully owns a sword and is distinguished by the nobility accompanying every his action. The reader gets acquainted with the hero at the moment when the injured Athos visits the chief - de Treville. The impeccable appearance of the musketeer does not give off bad health: the steps and handshake are firm, the clothes are clean, and the appearance is cheerful. When it becomes clear, that Athos is injured, everyone is shocked, because no one ever saw him as a weak person.

Athos in the Essays