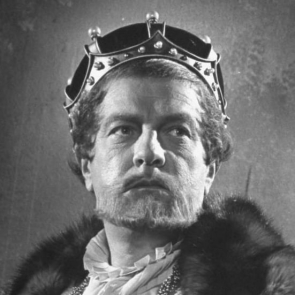 The present king of Denmark, Claudius, had gained his crown and wife by murdering his own brother. Worse still, it was poisoning, a cowardly and treacherous way of dealing somebody out. Thus, the method itself characterizes Claudius as a craven villain, good at plotting and scheming.

It seems that Shakespeare loathed this character just a little too much: he draws a rather direct comparison of Claudius with Cain, the world’s most famous kinslayer, and with the Serpent in the Garden of Eden. Every spectator and reader is familiar with these fundamental symbols, so these are perfectly understandable for audience at any given period.

In spite of all his vices, one has to admit that Claudius is not a bad king at all: he has an admirable diplomatic skill. He persuades everyone, except Hamlet, that his hurried marriage to Gertrude was a decision made for the good of Denmark, no less. Claudius manages to resolve a conflict with Norway, at least temporarily. He calms down Laertes, enough to stop his rebellion and redirect his hate to Hamlet, who is actually and unwillingly guilty of the accidental death of Polonius and everything that befell poor Ophelia.

Thanks Shakespeare, Claudius in not a cartoon villain. He completely understands his vices and shows some remorse, even if presumably no one is watching. However, he acknowledges his inability to repent completely. Note that repentance is an important aspect of Christian conscience, so no wonder that Claudius is anxious about it. At this, he also is a hypocrite and a selfish man until the end: while seeing Gertrude drinking poisoned wine, he merely murmurs several words and nothing more; fulfilling his plan is more important than the life of his supposedly beloved wife. In the end he predictably dies, killed by Hamlet and simultaneously poisoned by the weapon he prepared himself and intended to use (by the hand of Laertes) against the young prince.

Claudius in the Essays

Both Hamlet and Frankenstein deal with the concept of revenge. In a well-organized essay discuss the importance of revenge as a central theme in either Frankenstein OR Hamlet . Avoid mere plot summary. You must provide strong textual references to support your ideas. The revenge theme came in both...