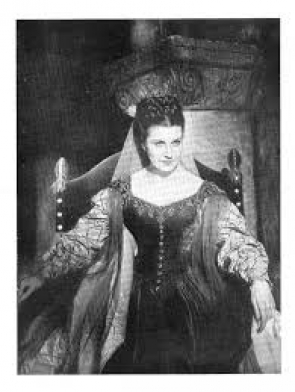 The queen of Denmark mostly stays passive, as a woman of that period should. She is the prize, the symbol of the kingdom in the hands of her new husband, and she is the mother loathed by her son. Hamlet, deeply sunk in his mourning, considers her to be a sinful and filthy woman, incapable to mourn her husband appropriately. Her attempts to cheer her son up do not improve Hamlet’s attitude at all. Why should they, really, the old king had been dead for two months only.

Hamlet never gave a thought to the fact that she possibly did not love her late husband at all, at least she did not feel romantic love. Dynasty marriages were rarely based on mutual romantic feelings, so Gertrude had just respected her husband, as a good wife and a good queen should, but there was no romantic love and strong feelings. Given that, it is not strange that she agreed on fast remarriage with her late husband’s brother: this was due to dynastic reasons. This consideration also explains the practical absence of sadness or acknowledgement of guilt in Gertrude’s behavior: the kingdom is saved, she is married and thus safe again, and now only her son upsets the regained balance.

Being a caring, if not too much loving mother, Gertrude at first tries to cheer her son up and fails, of course, because Hamlet’s thoughts are completely centered of the old king’s ghost and its revelations. Gertrude stakes on Ophelia, hoping that love and a lovely wife would heal Hamlet’s madness. Fail and casualties follow. Judging by the way Gertrude treats completely mad Ophelia and laments over her grave, her feelings for her probable daughter-in-law are kind and sincere, so at least Gertrude is capable to love. Does she love Claudius? Who knows, the old king gave Hamlet a special warning to leave his mother’s guilt to heaven.

Gertrude in the Essays