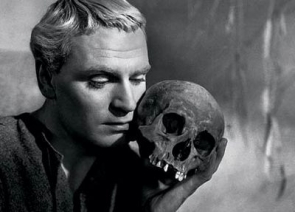 The character of Hamlet is one of the most vivid ones among those created by Shakespeare. Prince of Denmark represents a type of a thoughtful young man in a dire situation, anxious, angry and troubled by his inner conflicts and doubts. After his father’s ghost reveals to him all circumstances of the murder conducted by treacherous Claudius, young Hamlet falls into deeper mournful and melancholic condition. The truth is sour and startling: his uncle is guilty of both regicide and fratricide. In the given situation, a fast remarriage of Hamlet’s mother, Gertrude, becomes an even more reprehensible deed – she is married to her late husband’s murderer. The information obtained from such an unusual source causes Hamlet to behave strangely, imitate madness and provoke thoughts and actions of different characters, leading everything to final heap of bodies. Hamlet’s soliloquies are brilliant both as verses themselves and as illustrations of his train of thoughts and his state of troubled mind. His doubts, suspicions, feelings, a dual attitude to mother, touching and tender affection to Ophelia, an eerie pursuance of “not to be”, to die and sleep and dream perhaps, and much more, are thrown at the canvas of spectators’ perception in a handful of colorful dabs, each one placed with a perfect accuracy.

Torn between his duty of revenge and unwillingness to be a kinslayer, Hamlet is forced to act cunningly. He tries to provoke Claudius’s reaction, arranging a stage play that resembles the murder of the old king, and thus obtains all necessary evidence of the new king’s guilt. After that, young Hamlet has to keep a fragile balance between his plans of revenge and avoidance of king Claudius’s attempts to tarnish the prince’s reputation and eventually murder him. This leads to making the break with Ophelia, her madness and untimely death, which caused a loathsome fight of Laertes and Hamlet over her grave and, later, to their fatal duel.

Alas, poor Yorick! I knew him, Horatio, a fellow of infinite jest, of most excellent fancy.

Get thee to a nunnery, go.

Seems, madam, Nay, it is. I know not 'seems.'
This not alone my inky cloak, good mother.

Devoutly to be wished! To die, to sleep.
To sleep, perchance to dream—ay, there’s the rub,
For in that sleep of death what dreams may come
When we have shuffled off this mortal coil,
Must give us pause. There’s the respect.

He was a man, take him for all in all,
I shall not look upon his like again.

Heaven and earth,Must I remember?
Why, she would hang on him
As if increase of appetite had grown
By what it fed on, and yet, within a month
— Let me not think on't
—Frailty, thy name is woman!

There is method in my madness.

O all you host of heaven! O earth! What else?
And shall I couple hell? Hold, hold, my heart!

I have heard of your paintings too, well enough;
God has given you one face, and you make yourselves another:
you jig, you amble, and you lisp, and nick-name God's creatures,
and make your wantonness your ignorance.
Go to, I'll no more don't; it hath made me mad.

What a piece of work is man!

I'm sick in the heart.

Slanders, sir. For the satirical rogue says here that old men
have gray beards, that their faces are wrinkled, their eyes
purging thick amber and plum-tree gum, and that they have
a plentiful lack of wit, together with most weak hams—all which,
sir, though I most powerfully and potently believe,
yet I hold it not honesty to have it thus set down;
for yourself, sir, should be old as I am, if like a crab you could go backward.

There are more things in heaven and earth...than are dreamt of by your philosophy.

O God, I could be bounded in a nutshell
and count myself a king of infinite space,
were it not that I have bad dreams.

O, that this too too solid flesh would melt, Thaw and resolve itself into a dew!

The play's the thing.

Speak the speech, I pray you, as I pronounced it to you,
trippingly on the tongue.

Be not too tame neither, but let your own discretion be your tutor.
Suit the action to the word, the word to the action.

Hamlet in the Essays