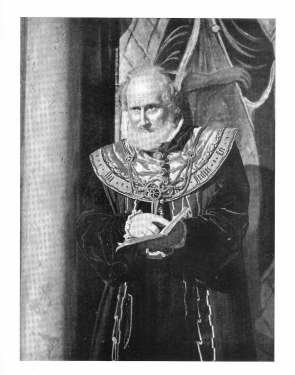 Ridiculous and instinctively smart, Polonius is a kind of comic relief in the play. A caring and protective father of Laertes and Ophelia is a little too protective and does a little too much conclusions and schemes plotting. One can only imagine how and why such a person became a counselor of the king, probably because likes attract. His manipulations are those of a great scale and quickly changing, he uses Ophelia without any hesitation and makes his instructions to his daughter sound like the will of God himself, so partially he is to blame for her tragic fate.

We meet Polonius when he is giving priceless advice to his son, Laertes. Taken out of the context, these suggestions are rather good and wise, but everything about Polonius is far from wisdom, so Laertes probably listens half-heartedly and surely not for the first time. After showering his son with clichés, Polonius switches to his daughter, Ophelia, and reminds her about the need of being chaste and a good girl. Ophelia, bemused, tells her father (and reader) about Hamlet’s weird behavior, unconsciously hinting that the young prince is mad because of love. At least, Polonius comes to this conclusion, especially after a rather funny conversation with Hamlet, and delivers his opinion to the king and queen. After a short debate, Ophelia receives her father’s new instructions, almost completely contradicting the previous ones: now she is literally a bait for Hamlet. Polonius hides and gracelessly listens to the young couple’s conversation. In spite of Hamlet’s behavior (“go to the nunnery” etc.), Polonius does not change his opinion about love madness of the young prince. After watching the play arranged by Hamlet, Polonius and Claudius develop a plan on eavesdropping the interaction between Hamlet and Gertrude. The king’s counsellor, faithful to his habits, hides behind the curtain, and when the situation becomes drastic, unwillingly echoes the queen’s cry for help. Hamlet, being sure that the eavesdropper is Claudius, stabs Polonius through the curtain, calling him a rat. Quite a precise determination, actually.

Polonius in the Essays