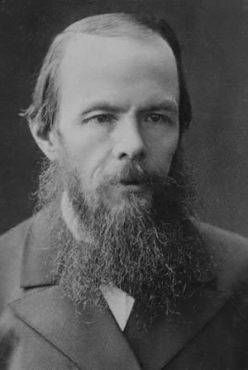 Fyodor (Mikhailovich – patronym) Dostoevsky, is a Russian writer, whose name is enlisted to the greatest and most talented people of letters of the 20th century. Working in and establishing the style of existentialism and psychological realism for Eastern Literature, his novels, and shorts stories explore the psychological aspect of a man’s doings and motifs. The writer is known for his investigation of the deepest and darkest corners of the human heart, actions and reactions, guilt and repentance, the divine and the earthly. Dostoevsky’s characters are not fiction; they are real people who suffer, redeem their sins, and try to make sense out of human existence.

Born in Moscow, Fyodor Dostoevsky (Nov 11, 1821) received his education at home from his parents and private teachers, who would discipline him to read literature on a daily basis, especially the Bible since the family was very spiritual, which was probably the reason why the writer would stay a devoted Christian for the rest of his life. Apart from the religious literature, the boy’s library included the greatest works of Russian romantics such as Pushkin and others; German poets Goethe and Shiller; epic Greek poems and Middle Age sagas. The family was well-to-do and appreciated good education, so the boy, at the age of 13, was sent to a boarding school, which was followed by the sudden death of his beloved mother.

1839 was a year of great changes and another tragic event. While young Fyodor was studying at another private school in St. Petersburg to become a technical officer for the army, he received a note that his father, a person whom the youngster despised all his life, had been brutally killed. Also, that was the year when the future writer was diagnosed with epilepsy that would be influencing his life and career from now on. Even though Dostoevsky didn’t like the military occupation, now, he had to earn a living and financially sustain himself as a complete orphan.

Four years later Dostoevsky moved in with his friend and started writing intensively. His first works were mostly translations, among them there was a low-quality Russian-French translation of some of Balzac’s works later published in literature almanacs but wasn’t noticed by the public eye.

However, 1844 was the time of great changes for Dostoevsky. The writer accomplished a novel called Poor Folk, which was taken by Dostoevsky’s roommate and shown to a few very influential people. This led to the book being published and the writer being recognized publically as ‘a promising young man’ for the first time.

Just in two years, Dostoevsky decided to release another book called the Double and a few novellas. Unfortunately, all of them got destroyed by critics and were seen as a complete disaster. This must have caused a worsening of the writer’s health since his seizures, and sudden epileptic episodes started to bother him more frequently.

On the other hand, despite a significant failure in the career during 1846-1848 Dostoevsky made a few new friends and got introduced to a prevalent political and philosophical movement of the time – socialism. He cherished the idea of a utopic world, where there would be no poverty or injustice, but his devotion to Orthodox Christianity was no-go in a world where science and progress should have changed humanity. Being not willing to betray his belief, Dostoevsky aborted any connection with his atheistic friends.

Petrashevsky Circle, a 1840s-group of alike-thinking writers, journalists and young politicians who were discussing possible reforms and social changes in the Russian Empire, became a breaking point of Dostoevsky’s life. He was a member of the club for almost three years (1846-1849) and took intensive participation in their dialogues about freedom of speech for mere people and writers, and eradication of slavery. Dostoevsky would use the circle’s resources to publish his minor writings and its library to work with modern and old manuscripts.

in 1849 the group was denigrated by one of its one members to the ruler for conducting anti-imperial discussions, arousing the folk’s paranoia, and propagating socialism. Even though Dostoevsky and other members were trying to prove their innocence before the tsar (ruler) they were all sentenced to death by being shot. The very moment when the execution of the order was about to take place, a letter from the tsar was delivered saying that the sentence had been changed to an exile to Siberia.

Having been released from imprisonment in 1859, Dostoevsky got married to Maria. The family was drowned in poverty and Dostoevsky would work for different journals as an editor and give private literature, Russian and French classes to children from wealthy families. Memoirs from the House of the Dead was released just two years after his return and was an autobiographical story based on his experiences in the exile. The work wasn’t appreciated at the time, but only years after the writer’s death.

As of 1864, at the age of 43, the writer started publishing novels and short stories that brought him renown and success. His Notes from the Underground was the first fully-developed philosophical insight into the notion of human freedom and self-awareness.

Published two years later, his opus magnum Crime and Punishment gave Dostoevsky a signature and recognition as a classical author. A complex psychological investigation of the nature of the notions of good and evil and the moral perspective of what can be socially despicable and rationally acceptable showcased Dostoevsky as a writer of the century.

The Idiot (1868), a story about an ordinary man who tried to lead a normal life in a perverse society, was one of Dostoevsky’s few works that included humor and satire.

In 1873 he released the Possessed, which was a political detective about a homicide, which had taken place a few years before in Moscow.

The last major work of the master of Russian literature was The Brothers Karamazov that appeared in the public eye in the early 1880s. There, Dostoevsky again investigated the nature of human guilt and redemption through a story of siblings who murdered their father.

Fyodor Dostoevsky’s heart stopped beating on February 9, 1881, at the age of 59, when his fame and success were on the peak. 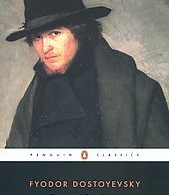 Crime and Punishment
The Brothers Karamazov 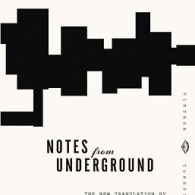 Pain and suffering are always inevitable for a large intelligence and a deep heart. The really great men must, I think, have great sadness on earth.

To go wrong in one's own way is better than to go right in someone else's.

The darker the night, the brighter the stars, The deeper the grief, the closer is God!