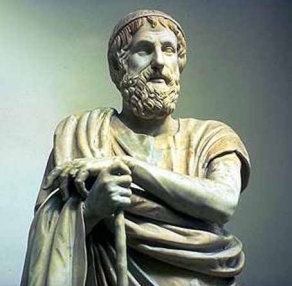 At the very beginning of the Greek culture, there is a name of legendary Homer. He is an ancient Greek writer and author of the well-known poems “Iliad” and “Odyssey”. Like a rising sun, Homer is a sparkling flash emerging from the darkness of the Hellenic world and shedding light on Ellas and its people.

Even though even up until today there is no bulletproof evidence that Homer is a real historical figure, the two texts that claim to have his authorship – “Iliad” and “Odyssey” – aren’t the oldest ones, but are considered to be the greatest literary creations of the ancient Greek literature. His texts are the origins of any epic writing and an example that every author has been trying to strive towards ever since. The glory of Homer’s name and the perfection of his wording made everybody forget about his predecessors, just like sun dims the stars.

This legendary man was born sometime between 12th and 8th century BC. By a common antique tradition, Homer was often imagined to be a blind wandering artist. Seven cities still contest the right to be called his native land. There was even a myth about a writing competition duel between Homer and Hesiod. Most likely he was from the Old Smyrna or the island of Chios. At the same time, most of the historians agree that Homer’s texts were written in Asia Minor.

For a long time, ancient tribes competed in developing their poems and heroic epos. Many authors profited from the rich culture and history of the region and created Ancient Greek epos. But it was Homer who brought together the bits and pieces of their works into one form of comprehensive perfection. He noticed separate and broken apart lines and created a huge saga from them. His predecessors wrote small songs with a simple plot and little rhyme, which correlated between themselves only by their external form. By uniting them all into one massive epic material, Homer created a complex narrative that followed one plan and logic.

Both "Iliad" and "Odyssey" are centered around the great Trojan War. This is the mythological event that received the archeological background in the 1870s when Heinrich Schliemann and his team discovered places that clearly resemble those depicted in the poems and today are called true sites of Troy. The events of “The Iliad” happen during the Trojan War and describe the fight between King Agamemnon and a great warrior Achilles. “The Odyssey” picks up the events already after the war when Odysseus is traveling home.

Homer also has other texts in his portfolio: he is supposed to have written the poem “Batrachomyomachia” about a complicated relationship between frogs and mice. His signature is also put on the “Homeric Hymns” collection, which consists of 32 hymns each praising a different deity. However, today there are numerous claims that these two texts were not written by the author. Even if they weren’t, they are still masterful in style and beautiful to read.

Today Homer’s name is associated with “Homeric question” – a compilation of problems, related to the origins and development of ancient Greek epos, including the place of folk art and the high literature role in it. The Homeric question is mainly about whether these signature poems really belonged to him. Or whether it is only one of them that was written by Homer. Or could be that he was only the last one to add a couple of lines but managed to get all the fame for the whole texts. A German scientist Friedrich August Wolf first raised these doubts in 1975. Wolf considered it impossible to write such a complex and big epos in the nonliteral era.

In the 19th century, “Iliad” and “Odyssey” were compared with Slavic folk tales, skaldic poems, and Finnish ballads. Both texts belong to long centuries of epic traditions, which means they were performed mostly orally and anonymously. The Aristotle was convinced that the main distinctive feature of “Odyssey” and “Iliad” is that Homer doesn’t roll out his story gradually, but rather built the text around one event – this provides the poems with dramatic unity and action. The other particularity noticed by Aristotle is that the character of the protagonist isn’t described through author’s words. It is the lines of the character himself that slowly draw a picture of him.

The Ionic Greek language of Homer’s poems is poetic and supradialectal. It does not remind the ordinary language spoken in a daily life. It is composed of at least two types of dialect with a strong tendency to preserve a more archaic structure of previous centuries. It is written in the hexametric metric composition of verses. A bit different language was supposed to enhance the impression of the greatness of the texts and its characters.

For ancient people, Homer’s lines were a symbol of Hellenic unity and heroism, the inspiration for bravery, the source of wisdom and knowledge about all sides of life – from military arts to practical morals. That’s why Homer is considered one of the creators of mythology, together with Hesiod they compiled a whole system of deities, gods and goddesses, provided them with certain authorities and supernatural powers, created boundaries and distribution of functions among them, gave them special crafts.

Even today Homer’s creations continue to inspire more and more writers to create great pieces of literature. Plato openly said that Homer was the one to teach the whole Greece and start a certain writing culture there. “Iliad” and “Odyssey” are still the subject of thorough investigations and speculations of those looking to establish the truth in terms of their authorship. 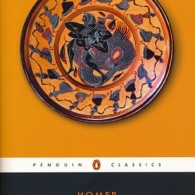 Of all creatures that breathe and move upon the earth, nothing is bred that is weaker than man.

…There is the heat of Love, the pulsing rush of Longing, the lover’s whisper, irresistible—magic to make the sanest man go mad.

Hateful to me as the gates of Hades is that man who hides one thing in his heart and speaks another.