Kate O'Flaherty (name in girlish years) was born February 8, 1850, in the city of St. Louis in the family of a businessman. Her father was an Irish immigrant, and the girl's mother had French roots, which enabled her to speak two languages. The girl was taught not only the languages, but also the culture of these two countries, which helped the young person to develop and learn many things, not only her culture, but also the cultural heritage of her parents.

Since 1867, the girl writes down everything she finds interesting and exciting in her notes. In her diary could find records of her thoughts, experiences, as well as excerpts and quotes from different books. Based on this diary in 1869 appears a short story "Emancipation: A Life Fable"

In 1868 Kate meets Oscar Chopin, and after two years of relations she becomes Miss Chopin. After the wedding, the young family embarks on an exciting journey through Europe and the USA.

The family settled in New Orleans, where they lived long enough and by the age of 29, Kate and her husband had one daughter and 5 sons. After the crisis in 1879, the family had to move to the northwest of Louisiana, to a small settlement. However, having lived there for less than ten years, the woman becomes a widow after her husband dies of malaria. In 1882, Kate remains alone, with 6 children and a huge monetary debt.

At first, she attempted to take on the husband's business in order to stay with the money and pay off the debt, but there was not much success, in connection with which she sold the family business and moved back to St. Louis.

The first writer's story appeared in the newspaper St. Louis Post Dispatch in 1889. The following year, the first novel, called "At Fault", is published, in which there is a story about a widow in love with a divorced man. The novel is a reflection of what worried Chopin at first her writing career.

The subsequent works, ("A No-Account Creole", "Desiree's Baby", "At the Cadian Ball", "Two Tales") are published in the period from 1891 to 1892. In these years, there are 13 more short stories were written and in search of a new publisher, the writer goes to New York where already in 1894 in the magazine Vogue appears "The Story of an Hour" and "A Respectable Woman". Next comes the first collection of "Bayou Folk" in the publishing house Houghton Mifflin, which enjoyed quite a lot of popularity. Critics of the editions of The New York Times and Atlantic favorably met her works.

In 1895, published "Athenaise", followed by the story "A Pair of Silk Stockings" (1896). The second collection of Kate ("Night in Acadie") is published in 1897 from the press of the Chicago publishing house Way and Williams. In the same year, the writer's grandmother dies and the writer begins work on her new novel "The Awakening", which is published in 1899 by Herbert S. Stone. The novel reveals the history of a woman and her attempt to rebel against the foundations of the patriarchal society of the South American town. The novel was recognized only in the middle of the twentieth century.

In 1900, magazine Vogue contained two more works by Chopin. At the same time, she is preparing her 3rd collection "A Vocation and a Voice". The last work of Kate goes to press in 1902 in the journal Youth's Companion.

August 20, 1904, after the Global Fair in St. Louis, Kate Chopin returns home with a migraine, she was very languid and tired. The same evening, she loses consciousness, and on August 22 dies. Doctors diagnose a cerebral hemorrhage. She was buried in the cemetery in St. Louis. 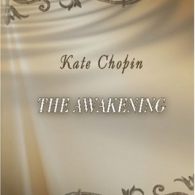 The voice of the sea speaks to the soul.

The voice of the sea is seductive, never ceasing, whispering, clamoring, murmuring, inviting the soul to wander in abysses of solitude.

The bird that would soar above the level plain of tradition and prejudice must have strong wings. It is a sad spectacle to see the weaklings bruised, exhausted, fluttering back to earth.